William George Jordan (1864-1928) grew up in New York City the son of Irish immigrants. I’m frequently asked what religion was William George Jordan. What I can say is that according to extended family members he and his family were Episcopalian. Another indicator is that he was married in the Grace Episcopal Church of New York City in 1922. His parents also referred to their heritage as Scotch-Irish. Indicating that they were not Catholic.

His father was a printer and perhaps that contributed to his vocation as a publisher and writer. He graduated from City College of New York in 1884 and immediately joined Book Chat, a monthly magazine which published reviews of current books and news in the publishing world. In 1888 he was hired as the managing editor of Current Literature, a magazine “devoted exclusively to the literature and topics of the day.”

On July 26th of 1891 The Inter-Ocean paper of Chicago published an interview with WGJ where he discussed his thoughts about education and “Mental Training”. After the article was published he received so many requests for information that he scheduled a trip back in October to lecture on the subject. The Inter-Ocean in a September 24th article reported that:

During the past few weeks the calls from Chicago have been so numerous, enthusiastic and positive for lecture courses and private society classes that he has concluded to resign his position in New York and come to Chicago.

He remained in Chicago for two years and then returned to Current Literature in 1894. In 1894 he published a short 20 page pamphlet entitled Mental Training, a Remedy for Education (HTML, PDF), that summarized his lectures. The opening paragraph starts as follows:

“There are two great things that education should do for the individual—It should train his senses, and teach him to think. Education, as we know it to-day, does not truly do either; it gives the individual only a vast accumulation of facts, unclassified, undigested, and seen in no true relations. Like seeds kept in a box, they may be retained, but they do not grow.”

This style of speaking plainly about a principle and then drawing mind-pictures using analogies is a style that he utilized broadly in all his writings. It is style well suited to the general subject of self-improvement that was the focus of most of his publications.

After returning to New York the “The Literary Review”, said the following:

Though Mr. Jordan has won a fine reputation as an editor he is one of the youngest of the magazine editors in this city. He has delivered many lectures on mental training in New York, Chicago, Minneapolis, and other cities, and his system has been received with great favor in all of these. During the last year he has brought Current Literature to a place of really notable excellence by the keen watchfulness which he keeps over the literary work that is being done both in this country and in England, by his catholic taste, and by his swift judgment. Besides being a first-rate editor and lecturer he is an admirable writer, as his vigorous editorials prove. Thus far nearly all of his contributions to the magazine have been unsigned, and his forthcoming book, it is thought, will establish his reputation as an author with a distinct and forcible style as well as of strong and original thought.

Although he never published a comprehensive book on his system of Mental Training he did gain an excellent reputation as a writer over the next 34 years. His books The Kingship of Self-Control, The Majesty of Calmness, The Power of Truth, The Crown of Individuality and The Trusteeship of Life are among the finest self-improvement books I’ve ever read (see “Books by William George Jordan”  for links to downloadable versions). I think Heber J. Grant, President of the Church of Jesus Christ of Latter-Day Saints said it best in a letter to WGJ about one of his books, the Power of Truth, when he wrote: “I know of no book of the same size that has made a more profound impression upon my mind, and whose teachings I consider of greater value.” I have similar sentiments regarding the five personal improvement books listed above.

While a noted author he was perhaps better known for his contribution to national politics which began with the publication of a pamphlet entitled The House of Governors in 1907. He sent this to the governors of the all 45 states and the president of the United States, Theodore Roosevelt. His concept of setting up an annual meeting of the governors to discuss common issues and push back against the centralization of power in Washington was well received. The first formal meeting of this group was held in January of 1910 during which he was elected secretary of the group.

Below is a picture of WGJ (back row 3rd from the right) with the governors, including Woodrow Wilson, at the September 1911 meeting. 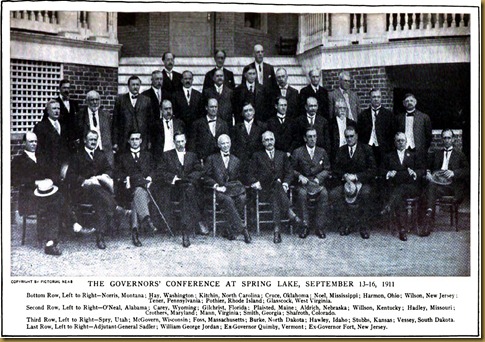 You may find that his introductory and closing remarks in The House of Governors (HTML, PDF) were seemingly written for our time.

The atmosphere of political thought in the nation today is permeated with restless rebellion of protest against the growing centralization at Washington. Rumblings of revolt in the public press are becoming louder and more unmistakable, and political leaders are furbishing the dingy armor of States rights in preparation for battle. The usurping by the government of the lawmaking power of the States is declared to be a forsaking of the great principle of democracy, the rock upon which the fathers founded the Republic.

The Federal Government, following the spirit of the age, is itself becoming a trust—a great governing trust, crowding out, and threatening openly still further to crowd out, the States, … As the wealth of the nation is concentrating in the hands of the few, so is the guidance of the destinies of the American people becoming vested in the firm, tense fingers of a small legislative syndicate. The nation soon will be no longer a solid impregnable pyramid, standing on the broad, firm safe base of the united action of a united people, but a pyramid dangerously balanced on its apex—the uncertain wisdom of a few.

… We need in our country today less politics and more statesmanship, less party and more patriotism. We need an awakening to higher ideals. We need a higher conception of America's place and destiny in the evolution of the world. We need something nobler as a purpose than our self-satisfied complacency at the material prosperity of the nation, for there is a moral and ethical success that is never rung up on a cash-register. We need the scourging of the money changers  out of the temple of legislation—State and nation! We need a purifying and ennobling of the body politic. We need the clear clarion voice of a great inspiration to rouse the States to their duty—not the gilded phrases of mere rhetoric, but the honest eloquence of a high and exalted purpose like that ringing speech of Patrick Henry's, a century and a quarter ago, which breathes the very spirit of the present hour of need when it is said that the States are too weak to do their duty and must surrender to government centralization;

"They tell us that we are weak, unable to cope with so formidable an adversary. But when will we be stronger? Will it be the next week or the next year? Shall we gather strength by irresolution and inaction? Shall we acquire the means of effectual resistance by lying supinely on our backs and hugging the delusive phantom of hope until our enemies shall have bound us hand and foot? Sir I say we are not weak if we make a proper use of those means which the God of nature has put into our power .”

Whatever tends to lessen the right of the American people to be absolutely self-governing, whatever tends to take from eighty. million people their privileges and to hypothecate then in the hands of a few, is a menace in principle, hazardous in what it  portends and in what it makes possible.

His influence in establishing this group of governors was the subject of many articles through the remainder of his life and beyond. The last article I found which mentioned this was in a 1960 betrothal announcement of his grand-niece. In the announcement it was noted that “she is the grand-niece of the late William George Jordan, who was editor of The Saturday Evening Post, managing editor of The Ladies Home Journal and who proposed the formation of a Governors Conference of the United States.” Note, I have since conversed with the niece and she has been most helpful and kind.

Scanned versions of most of his publications are available on online. Since these are out of copyright I've taken the time to create PDF and HTML versions of them. I’m also creating EPUB and MOBI (Kindle compatible) versions that I’ll add as I finish them. To download any of them go to my post “Books by William George Jordan”.

Note, there is another author named William George Jordan (1852-1939), a professor at Queens University in Kingston, Canada,  who published a number of books on the Old Testament and religion during the early 1900’s. This can cause some confusion when searching for books and articles by our William George Jordan.

A few of my favorite William George Jordan quotes:

Truth can stand alone, for it needs no chaperone or escort. Lies are cowardly, fearsome things that must travel in battalions. They are like a lot of drunken men, one vainly seeking to support another. —The Power of Truth

A lie may live for a time, truth for all time. A lie never lives by its own vitality; it merely continues to exist because it simulates truth. When it is unmasked, it dies. —The Power of Truth

Gossip … has caused infinitely more sorrow in life than murder. It is drunkenness of the tongue; it is assassination of reputations. It runs the cowardly gamut from mere ignorant, impertinent intrusion into the lives of others to malicious slander ... He who listens to this crime of respectability without protest is as evil as he who speaks. One strong, manly voice of protest, of appeal to justice, of calling halt in the name of charity—could fumigate a room from gossip as a clear, sharp winter wind kills a pestilence. —The Crown of Individuality

If you read any of his books feel free to share your thoughts or favorite quotes. My father claims that you can randomly open any of these books, blindly put your finger anywhere on the page, and find a quotable quote in the paragraph on which your finger landed. So far I have not been able to prove him wrong :). 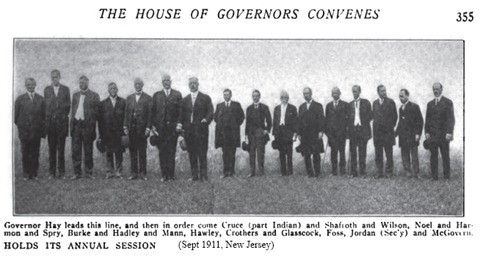