William George Jordan was a strong advocate of changing the focus of education. He argues that “there is not one single power, faculty, process or quality of the mind that is trained and developed by our present system of education. Our powers are not merely untrained—they are positively mistrained.” He says that “Education believes that by forcing a certain amount of knowledge, principally by means of textbooks, into the minds of children, that somehow in the divine mystery of mental processes this knowledge will not only be retained, but the mind of the individual will be exercised, trained and developed.”

Jordan advocates for a system whose “final aim … is to teach thinking, exercising the individual not in what to think, but in how to think, making all parts of his mental machine work individually at their greatest ease, smoothness and rapidity and in finest co-operation.”

In 1891 Jordan resigned from his position as managing editor of Current Literature, a prominent magazine devoted to promoting literature, to lecture on educational reform and a new model he called “mental training.” He moved from New York to Chicago and began to teach a series of 12 lectures called Mental Training: By Analysis, Law, and Analogy. Here their titles:

The following is the fourth and final articles in a series of articles on education (What’s the Matter with Education, Educating for Seven Lives, Modeling Education on Genius, Mental Training: A Remedy for Education) written by William George Jordan and published in The Forum, a well respected journal of the late 19th and early 20th century. 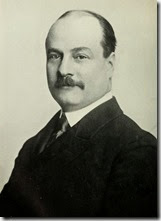 When an educator of the unquestioned ability and high standing of Dr. Nicholas Murray Butler[1], president of Columbia University, sums up education in a sentence, his words are worthy of careful listening. He said on one occasion: “When one reflects upon the ravages which have been committed in the name of education, there is some excuse for wondering whether it would not be advantageous to agitate for compulsory illiteracy.” Such an expression from the lips of a mere layman might be construed as wild and fanatic, but spoken by Dr. Butler they represent the sane, serious crystallization of the thought, observation and long experience of a clear thinker who is in a position to know. They show relentlessly that there is something intrinsically rotten in the Denmark of education.
Read more »
Posted by Rod Mann No comments:

The following is the third in a series of four articles on education (What’s the Matter with Education, Educating for Seven Lives, Modeling Education on Genius, Mental Training: A Remedy for Education) written by William George Jordan and published in The Forum, a well respected journal of the late 19th and early 20th century.

The world’s most urgent need is not a new crop of geniuses. We could get along very comfortably even if we did not have a new great book, a new marvelous discovery, a new revolutionary invention, or a new superb painting or piece of sculpture for a hundred years to come. The great geniuses of the past still live in their works. They still speak their undying messages of revelation, beauty, truth, inspiration and wisdom. Though we have listened to them we have learned but a small part of their inspiring quality. We have not even begun to exhaust the genius of either past or present.