"The Coloured Picture Bible for Children" Part 1 of 4

My Christmas gift this year  to you, dear readers, are scanned copies of pictures from The Coloured Picture Bible for Children [1] which was published in London in 1884. These can be used for family home evening lessons or other teaching opportunities.

I first found these online when I was looking for images to use in earlier blog posts that covered biblical topics [2]. I recently purchased my own copy of the children’s Bible. It’s a small book (6”x7”x1”) and while the illustrations are great the writing could be better.

The picture bible is divided into into 4 sections. I’ve create a blog entry for each one (“I. Creation of the World to the Death of Moses”, II. “Judges, Ruth & Kings”, III. “Hezekiah to the end of the Old Testament”, and IV. “The Holy Gospels”) where the illustrations are shown in the order they appear.

Note, At the end of the post I’ve included links to download all pictures for each section and a scanned version of the entire children's Bible.

Below are a list of great books, recommended by my father (Ron Mann), and me that will help you discover your American heritage and how to protect it. They are organized by category.

Some of these books can be downloaded or viewed online. I've added links to connect you to the appropriate sites. For most books I've linked the title to its entry in books.google.com which has links to where the book can be purchased and often has a description and reviews. Should you be looking for additional information on American History, The Constitution, or current events contact Ron at sweetshellygrapes@gmail.com. He has one of the most extensive libraries on George Washington around and loves to share his thoughts about the Constitution and our Founding Fathers. While working for President Reagan he helped formulate the legislation to create a The Commission on the Bicentennial of the U.S. Constitution and was later named Deputy Director of the Commission. In his Challenge to the readers of The 5,000 Year Leap he says:

“It was Patrick Henry that said: ‘I have but one lamp by which my feet are guided; and that is the lamp of experience. I know of no way of judging the future but by the past.’ Recent experience should be a serious warning that we have lost our way and need to drink from the well of knowledge provided by our Founders. Unless the people of this nation take seriously the storm flags waving, we are doomed to repeat the past mistakes of those who refused to pay attention to history and end up in the graveyard of fallen nations. We have the knowledge and time to make a course correction if we will.”

We need to start by becoming familiar with the Constitution and the principles contained therein. We need to understand its words as the founders intended them to be understood. The list of books below can point you in the right direction. Those with bold titles are highly recommended and easy to read and understand..

The Constitution & Declaration of Independence

Of all the dispositions and habits, which lead to political prosperity, Religion, and Morality are indispensable supports. In vain would that man claim the tribute of Patriotism, who should labor to subvert these great pillars of human happiness, these firmest props of the duties of Men and Citizens.

Daniel Webster made this remark in a speech at an event celebrating the life of Washington:

But, gentlemen, let us hope for better things. Let us trust in that gracious Being who has hitherto held our country as in the hollow of his hand. Let us trust to the virtue and the intelligence of the people, and to the efficacy of religious obligation. Let us trust to the influence of Washington's example. Let us hope that that fear of Heaven which expels all other fear, and that regard to duty which transcends all other regard, may influence public men and private citizens, and lead our country still onward in her happy career.

Patriotism is as much a virtue as justice, and is as necessary for the support of societies as natural affection is for the support of families. The Amor Patriae [love of one's country] is both a moral and a religious duty. It comprehends not only the love of our neighbors but of millions of our fellow creatures, not only of the present but of future generations. This virtue we find constitutes a part of the first characters of history.

Many of the founders expressed similar sentiments regarding morality and religion and their indispensible role in maintaining a free society. As William George Jordan said in 1907,

We need in our country today less politics and more statesmanship, less party and more patriotism. We need an awakening to higher ideals. We need a higher conception of America's place and destiny in the evolution of the world. We need something nobler as a purpose than our self-satisfied complacency at the material prosperity of the nation, for there is a moral and ethical success that is never rung up on a cash-register. We need the scourging of the money changers out of the temple of legislation ― State and national. We need purifying and ennobling of the body politic. We need the clear clarion voice of a great inspiration to rouse the States to their duty ― not the gilded phrases of mere rhetoric, but the honest eloquence of a high and exalted purpose

With this in mind below are several of what I think are the best books on morality, human nature  and  overcoming the “natural man”. Coupling a strong moral base with an understanding of the principles of liberty we may become a people who can re-establish and maintain the freedom our Constitution intended to provide.

Please let me know if you have additional suggestions.

Below is the first national Thanksgiving Day proclamation written by President George Washington. It affirms that those who participated in the founding of America acknowledged the hand of Providence, both in winning the Revolutionary War and establishing the Constitution. You’ll find humility grace and a recognition of the hand of God along with a sense of our obligation to serve others and promote “the knowledge and practice of true religion”. Contrast these words with those emanating from Washington today and you’ll see why a change is needed. Unfortunately, the words from our political leaders usually reflect what we want to hear. The change we need to make starts with ourselves and for that I’m grateful. Grateful that we live in a country where that is still possible.

By the President of the United States of America
A Proclamation

Whereas it is the duty of all Nations to acknowledge the providence of almighty God, to obey his will, to be grateful for his benefits, and humbly to implore his protection and favor — and Whereas both Houses of Congress have by their joint Committee requested me “to recommend to the People of the United States a day of public thanksgiving and prayer to be observed by acknowledging with grateful hearts the many signal favors of Almighty God, especially by affording them an opportunity peaceably to establish a form of government for their safety and happiness.”

Over the last 18 months I’ve seen a growing number of articles in newspapers promoting the idea that Utah’s caucus system is flawed and must be revised to prevent a variety of ills. I read another such article Saturday morning in editorial section of the Deseret News.

Before I go over the assertions made in this article let’s quickly review how the caucus system functions in Utah. The state is divided into ~2,200 precincts. In March of each election year precinct meetings are held throughout the state for each political party in which precinct officers (chair, vice-chair, secretary and treasurer) and delegates (county and state) are elected for 2 year terms.

A couple of weeks ago I posted a set of questions I would seek to answer for candidates looking for my vote. Thursday evening I attended an event where state Senator Dan Liljenquist spoke about fiscal responsibility. From what I understand there is a good chance that Dan will run against Hatch to be the Republican nominee for the US Senate. I’d like to share with you what I was able to glean from this event and some time spent afterwards relative to my list of questions.

Of late my life seems full of happy coincidences (miracles as I choose to view them). For example, today at church as we began to sing one of the hymns I wished that we would sing more than the first four verses of this particular hymn (99.9% of the time we only sing those verses that are written between the lines of music – typically 4 verses – and not the additional verses written out at the end of the music).

Well guess what? The chorister had us sing one of the two extra verses. Not a big deal. Well maybe but for me it was important as the additional verse carried for me extra import and I really thought about the words we sang. Then I took the time to read and ponder the last verse which I would normally not do. This last verse stayed with me throughout the day.

How great, how glorious, how complete
Redemption’ grand design,
where justice love and mercy meet
In harmony divine!

How Great the Wisdom and the Love, Eliza R. Snow, verse 6.

You can listen to this hymn by playing the following YouTube video. Probably sounds better than we did at church :). 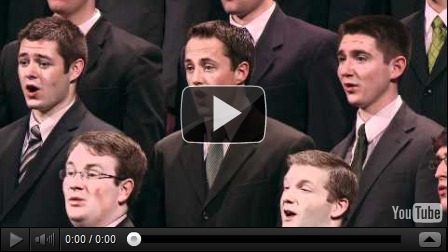 Happy coincidence or miracle. Here’s the definition of miracle: