What do Mahatma Gandhi, Arthur Conan Doyle, Winston Churchill, Baden Powell (founder of the Boy Scouts), and Rudyard Kipling have in common? They were all participants in the 2nd Boer War which pitted the British Empire and the Cape Colony against the Boers of the Transvaal and the Orange Free State. This was a brutal war, one in which the Boers initially held the upper hand but which later devolved into a guerilla war that the heavily outnumbered Boers eventually lost. A battle early in the war provides an example of how persistence (faith amidst adversity) can overcome incredible odds. 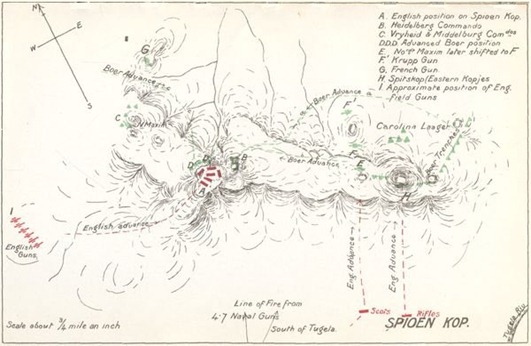 Spion Kop was the highest hill on a ridgeline that separated a British force of over 20,000 troops from 5,500 British troops held under siege in the town. In order to rescue the troops at Ladysmith the British plan was to seize Spion Kop, use it to shell the Boer on the other side, and open a path to the town of Ladysmith. 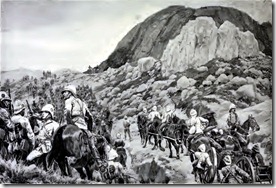 16,000 troops along with artillery were sent to the vicinity of the hill as part of the plan to take the hill and rescue the force at Ladysmith. After several days of maneuvering and feints the British sent 1,700 men to take the hill. They started marching shortly after dark and reached the crest of the hill during the darkest hours that precede the dawn. They surprised the Boers and overwhelmed them. By the end of the day those Boers that were not killed melted away into the darkness.

With only 10 wounded the British plan had gone unexpectedly well. Rather than explore the rest of the hilltop in the darkness they elected to dig at what they thought was at the high point of the hill. There was a heavy mist which limited visibility until 8:00 am by which time about 300 yards of shallow trenches had been dug. 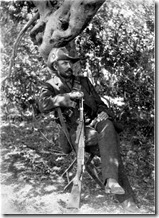 Meanwhile most of the Boers abandoned the hill and ran to the camp below. General Botha, who was in charge of the Boer troops in the area, immediately understood the danger of the British holding the hill. He tried to rally about 1,000 citizen-soldiers (burghers) to retake the hill in spite of the bleak outlook. He had faith that they could win if they but tried. 400 burghers made the attempt and were able to get back to the top of the hill before the mists cleared, although their losses were heavy. They knew the hill well and were able to take positions opposite the British trench line on higher parts of the hill top. As a consequence when the mists lifted they were able to shoot down at the British and inflict terrible casualties. 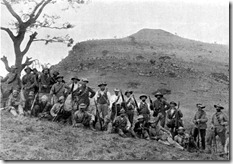 During the course of the day most of the British officers were killed including the general who was in charge (over 250 soldiers and officers were killed and many more wounded). Although the British on the hill outnumbered the Boers by more 10 to 1 they could not make any progress. Late in the evening the senior officer called for a retreat. He and his troops were exhausted and discouraged. As he made his way down the hill he encountered 2,000 reinforcements on their way to help but could not be dissuaded from retreating. He and his troops were utterly spent. 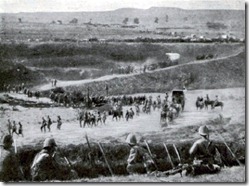 What the British did not know was that as darkness fell, the Boers, certain that they could not hold their positions for another day, abandoned the hill. General Botha was able to persuade a few to return with the promise that, “if they would persist the British would give up.” They returned before dawn and in the morning the hill belonged to a handful of Boers rather than the 1,000’s of British soldiers who were earlier on the hill.

We are all discouraged at times and reluctant to embrace a challenge when the odds are formidable. But we really never know what will happen if we try. History is replete with great examples that can replenish the well of hope and lift our hearts. The Revolutionary War, Mahatma Gandhi's struggle to free India, Winston Churchill's stand against Hitler ... .

"Nothing in this world can take the place of persistence. Talent will not: nothing is more common than unsuccessful men with talent. Genius will not; unrewarded genius is almost a proverb. Education will not: the world is full of educated derelicts. Persistence and determination alone are omnipotent. The slogan 'press on' has solved and always will solve the problems of the human race." —President Calvin Coolidge

I can see in my minds eye individuals taking up challenges and repeating the call by General Botha to retake the hill and persist even when logic tells them to do the opposite. Mothers and fathers who struggle to raise children in a difficult world. Engaged parents who fight to improve our education system. The common man struggling to find his voice in restoring our Constitutional Republic. Small business leaders facing an uncertain future who daily take leaps of faith. All hearing the call to retake the hill; each fighting an internal battle over self to take up the cause in spite of apparent overwhelming odds.

The Battle for Spion Kop for me is yet one more story highlighting the value of faith and persistence.

Note, the information on The Battle of Spion Kop came primarily from the book “The Boer War” by Thomas Pakenham. It is a fascinating read and offers a lot of interesting insights into the history of this conflict.

Email ThisBlogThis!Share to TwitterShare to FacebookShare to Pinterest
Labels: Life

The Utah Compact, One Mann’s Analysis

In March of this year the Utah County Republican Central Committee considered replacing the text in its platform regarding immigration with the Utah Compact. Prior to this I had not taken the time to do a critical view of Compact. The Central Committee rejected the change bit did adopt a compromise measure. This measure needed to be ratified at the county organizing convention but was rejected today. Given that the original immigration plank remains I suspect the issue of adopting The Compact or similar language will be raised again. Below is the Compact followed by my analysis of it related to adopting it as part of a party platform.

FEDERAL SOLUTIONS Immigration is a federal policy issue between the U.S. government and other countries—not Utah and other countries. We urge Utah’s congressional delegation, and others, to lead efforts to strengthen federal laws and protect our national borders. We urge state leaders to adopt reasonable policies addressing immigrants in Utah.