I wrote the following regarding civility in politics nearly eleven years ago (July 19, 2010). It is probably more relevant today than it was then. The lessons I learned apply not only to elections but also to the day in day out battles over issues. Civility does not mean compromising on principles but does mean listening, being willing to see things from another’s point of view, looking for common ground, and often taking the high road when opponents don’t.

It has been about a month since the primary election, and I feel settled enough to have a good mental review of my experience. Even though the candidate I worked to support lost I would do it all again. Of course, there are things I would do differently. It would be sad if this were not the case because that would mean I learned nothing. Let me share with you some of the positives.

I found that, on a one-on-one basis, I was almost always able to have civil conversations with individuals who supported the opposing candidate. The only exceptions were with those who were heavily invested in the opposition campaign and had no interest in listening to other perspectives. These people were the exception not the rule, which was something that I was delighted to discover.

I genuinely enjoyed the conversations as they always caused me to think about why I supported my candidate and over time strengthened rather than weakened my resolve. Had I simply rejected the other perspectives out of hand I would not have had that growing experience. Even when the other person was initially hostile, I found that genuinely listening softened the tone of the conversation and resulted in a net positive experience. When I reacted by attacking (I must admit that happened once or twice) the dialog devolved. These experiences left me with a bitter aftertaste. Great life lesson here! The good thing is that were I ten or twenty years younger I would have had tasted a lot more bitterness.

It seems like every election cycle I hear people saying that things are getting worse with respect to civility. That may be true in the short term, or maybe people just forget over time the experience of prior elections. Let me share some quotes from a prior election. The names were changed to give you a moment to try and figure out who the participants were: 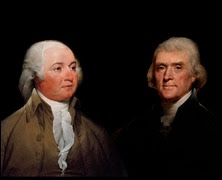 The election referred to above was the presidential election of 1800, pitting the current president, John Adams against Thomas Jefferson. Today both men are revered by many for their many contributions to the founding of our nation. Remarks 1 and 2 were made by Alexander Hamilton against Adams, a member of his own party (the Federalists). Remarks 3 and 4 were made by James Callender, a propagandist, working with the encouragement and financial support of Jefferson against Adams. See "John Adams" by David McCullough pages 537, 545, and 549.

One of my favorite Alexander Hamilton quotes seem apropos, “… nothing could be more ill-judged than that intolerant spirit which has, at all times, characterized political parties. For in politics, as in religion, it is equally absurd to aim at making proselytes by fire and sword. Heresies in either can rarely be cured by persecution"--Federalist #1, fourth paragraph. From the example above, it seems Alexander still had a bit of fire and sword in him. I admire Hamilton for his courage in admonishing himself as well as others.

Human nature has not changed. The quest for political power often leads the best of men to set aside civility to ensure victory for a cause they believe is just.  Does it have to be this way? No, but more than likely it will continue as most cannot resist the urge to reinforce what they "know" to be true about their opponent using whatever means available. And those that use this playbook frequently win.

If we are unhappy about this then it is up to us to set aside the political rhetoric that comes to us through the airwaves, over the Internet, and via the postal service. We need to take the time to meet the candidates and listen to their own words, not what someone else says that they said. This is probably too much to ask of everyone. Fortunately, in Utah we have the happy circumstance that we use a delegate system to select our party candidates at convention or at least narrow the choice to two that voters can choose from. If there is a primary, we can ask the delegates, whom we elected to represent us at our party conventions, about their thoughts on the candidates. They generally spend a lot of time meeting with candidates in small group sessions and thereby develop informed opinions.

If we elect politicians without seeking to understand their views, then we are shortchanging ourselves and helping perpetuate the cycle of negative campaigning and meaningless sound bites. Many convention delegates share their views via e-mail, social media, and precinct meetings. We can also simply call our delegates. After all, they are our neighbors and friends.