I had expected this council meeting to be somewhat exciting (translated contentious). Although there were lots of questions regarding the several zoning changes and strong interest from several residents and a developer the meeting was very cordial and the council was united in its decision. I want to thank those that participated (Gary Wright, Tori Gagon, Cori and Ryan Ollerton, Rebekah Kaylor, and Greg Nield) in the discussion for the professional manner in which they conducted themselves.

Below is the meeting agenda with my comments in italicized text.

One person (didn’t write down his name) mentioned that they are developing property along Alpine Hwy and want to have a 14 ft. setback from the rather than the current 30 ft. (?). I suspect this will go to the planning commission and then come back to us.

All consent items were passed. I would like to thank Sherry Carruth for being willing to serve again and Brady Brammer for volunteering to serve the community. The change to the culinary water ordinance was to ensure that future developer participate in the pressurized irrigation system and eliminate cross connects between the culinary and pressurized irrigation system for new development.

I’m not sure how much good proclamations like the “Non-Traditional Student Week” actually do. I imagine there might be some benefit if this is done in conjunction with activities that promote going back to school such as a scholarship for “non-traditional students” (aka older people going back to finish their degrees) or informational programs on how to get “restarted”. Unfortunately I’m not aware of any local effort in this regard but it seems to me to be something the library could participate in. 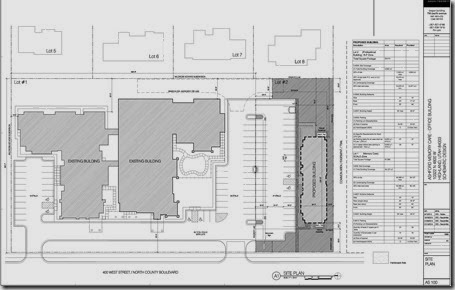 The three items above all related to a two-story office building that the developer of the Ashford Memory Care and Assisted Living center wants to build on the south portion of the property as shown in the diagram above.

Three of the four residents to the east of the development (top of diagram) were opposed to a two-story office complex. All of the residents to the east wanted the trash container moved closer to the road. The resident to the south (left of diagram) did not want the trash container moved but supported the two-story building with the possible exception of having only a 10 foot set-back.

In order for the developer to build according to the plan shown above the property needed to be rezoned from mixed use to RP (residential professional) AND 3 changes needed to be made to the RP zone regulations:

After a lot of discussion the council unanimously decided to 1) revised the RP zone to allow the planning commission to approved a decreased road setback if it benefits residents by creating additional space between them and the business; 2) deny the motion to allow side setbacks to be reduced 3) deny the motion to reduced the trash setback requirement; and 4) deny the motion to rezone the property to RP. We also asked the developer to come up with another plan before we would consider the rezoning and conditional use permit.

Note, Dennis LeBaron recused himself from this vote as his wife works for the developer. Tim Irwin was absent and so only three council members voted on item;  Brian Braithwaite, Jesse Schoenfeld, and myself.

Staff asked that we remove the requirement to published surplus property sale items in the monthly newsletter before they could be sold. This was approved but the staff will ensure the items are posted online, that a reminder to check for surplus items online (with the appropriate web address is published in the newsletter, and that there will be an option to subscribe to surplus items so an email will be sent to you when surplus items are ready for sales. Staff felt that the newsletter requirement was slowing the sale of surplus land associated with Open Space. A requirement still exists for this to be published prior to sale, we just don’t have to wait for the monthly newsletter now. This was unanimously approved

The policy was revised to have public use of the multipurpose room be allowed only during the hours of operation of the library (i.e. the room must be vacated by 9 PM M-F and 6 pm on Sat, when the library closes.). A couple of other favorable minor changes were also recommended. This was unanimously approved.

COMMUNICATION ITEMS (These items are for information purposes only.)

The council’s unanimous view on this was that the Open Space setbacks should not be revised. A homeowner had requested that an exception be made so that he could remodel his home and have a 22 ft. setback (the current code allows for a 25 ft. setback). This was taken to the appeal authority and denied so now the homeowner wanted to bring the request to the council and have the code revised.