The most interesting part of the council meeting was the Road Maintenance Presentation and Discussion, which I will discuss at the end of the post. Here is a brief summary of the votes which were taken:

Item 3: Staff made the following recommendation:

The State of Utah has mandatory standards for building construction which are the International Residential Code (I.R.C.) and the International Building Code (I.B.C.) and related codes such as the mechanical code, fire code, etc. Each local municipal entity is required to implement and adhere to these Codes. New codes are adopted by the State every three years. Most builders are already following the 2012 Codes.

Given that the city is required by the state to use codes which are updated every three year I supported motion to revise our ordinance so that we don’t have to amend it every three years to adopt the updated state codes. Brian Braithwaite made a friendly amendment to ask the city to include a link to state code on our site and ensure that the updated code could be accessed through the city library or city staff.

Item 5: Amendments to the Removal of Neighborhood Option Trails and Designation of Open Space Property for Disposal city ordinances. The Open Space committee recommended a number of changes to simplify and clarify the code. These were approved unanimously.

Matt Shipp (City Engineer) along with Marty Beaumont (JUB – the contractor that performed the road condition inventory in 2011) presented their current thoughts on the maintenance of roads considered to be in good condition. These were rated as A, B, or C condition roads when the road study was performed in 2011. Road work on poor condition roads (D & F) will be part of a road capital plan which will come out later this year (September).

Note, in a previous post entitled “Road Maintenance and Your Dollars” I reviewed the study and included links to a couple of short articles that discuss road maintenance. They are worth reading.

JUB worked with the city to put the road inventory data into a computer model that can be used to project how roads will deteriorate over time and the costs associated with maintaining them. The model can help determine the order that roads should be worked on to maximize the effectiveness of  the dollars being spent.

Two key concepts to consider is that as roads deteriorate over time, the rate of deterioration increases and the cost to repair/maintain roads increases significantly as their condition degrades. The basic principle is that roads cost less to maintain over the long-term if they are well maintained. The charts below illustrates this concept.

The Changing Cost of Road Maintenance/Repair 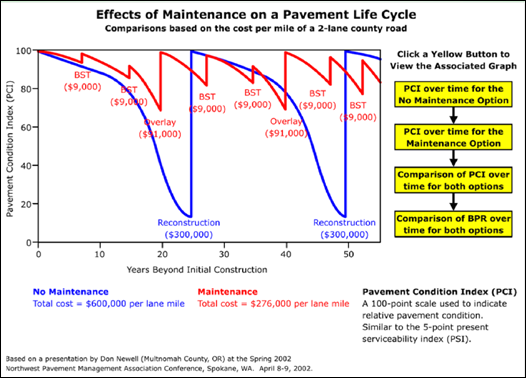 One recommendation from JUB was that rather than divide the city into five zones and then rotate the focus of road work one a different zone each year, as was determined last year, that each year the highest priority roads in the city be worked on regardless of location or zone. I agree with this approach rather than the zone concept.

The council asked Matt to do a five year plan based on $500,000 and then provide the council with some estimates as to how the overall road condition would be improved if additional funding were found.

Matt did provide a chart which showed the impact of various levels of funding on the overall condition of the roads which are currently in good condition (i.e. those having a PCI rating of 55 to 100 – grades A, B & C).

Effect of Various Annual Spending Levels on PCI Over 10 Years. 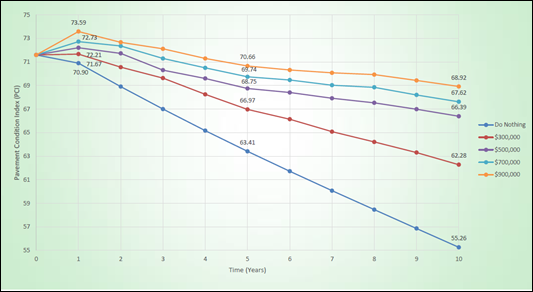 The recommendation from JUB was that a 10-year target of 66 to 68 would be a good range to end at. Low than that the roads would degrade relatively quickly (refer to first chart) and raise the cost of maintenance after the 10 year mark.

Please note about 70% of the surface area of Highland City maintained roads have a PCI rating of 55 to 100 (grades A through C). 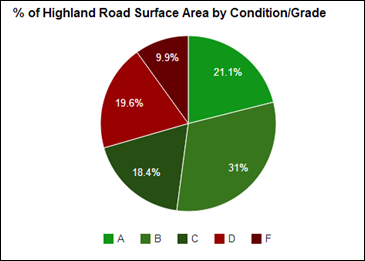 Caveats: I did not ask if the model has been updated with current road conditions (the study was done in 2011 and it is now 2014. I would hope so but it will be best to find out.