The city has had a lot of issues to deal with over the last few years and has made significant progress on them. Here are a few:

Here are some significant issues we are currently facing:

The bottom line is I don’t agree that time has run out on Open Space /Parks/Trails and would hate for the council to make a decision that cannot be reversed until we understand the issue better (e.g. what the funding deficit is – I am sure there will be some catch-up costs and then ongoing ones). I believe in 2019 we will have time to develop a complete enough picture to start work on a comprehensive plan with options that we can take to the residents. We will have several options if we need to raise additional funds: fee, RAP tax (Recreation, Arts and Parks 0.1% sales tax which would net us about $100K), and/or property tax increase. Additionally, staff is working on getting our own zip code (no guarantee) or  otherwise addressing the internet sales tax issue. Councilman Ostler has been looking into this and believes we are losing well over $100K and potentially over $200K per year. 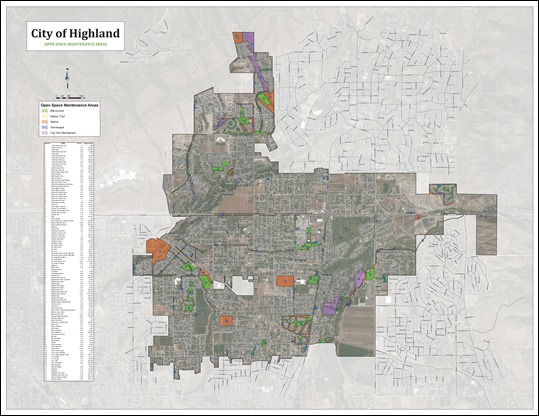 Map of all maintained grass areas in Highland (something we didn’t have last year).

As mentioned we do have actual numbers for the cost of mowing and trimming (inclusive of equipment costs). The total annual cost for all Open Space subdivisions is $234,082. The Open Space fee generates $282,480 per year. This means that mowing and trimming consumes 83% of the Open Space fees leaving the remainder to cover sprinklers, fertilizing, trail maintenance and snow removal …, which of course it doesn’t. This is why the city covers 30% to 45% (depending on the year)  of the cost of Open Space maintenance. You can find my roadmap for resolving the Open Space issue in my 2018 goals post. We are part way through the cost identification process and should be able to complete this sometime in 2019. Then as mentioned we will be able to work on options for going forward that we can present to the residents.