Amazing Grace: The Rest of the Story

The following story regarding the composer of "Amazing Grace," one of my favorite songs (I especially like the version performed by The Canadian Scottish Regiment Pipes and Drums), is found on page 178 of the book entitled "The Rebirth of America" published by the Arthur S. DeMoss Foundation.
"In the eighteenth century, a godly mother knew that her years of life were coming to an end. She taught her young son all that she knew about God and the Christian life.
When her son was seven, she died. That son soon rejected his mother's teaching. He went off to sea and eventually became the captain of a slave trading ship. 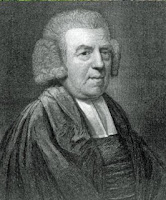 His crew became so disgusted with with the depravity of his actions that one day when he fell overboard while in a drunken stupor, they rescued him by throwing a harpoon into him and pulling him back into the ship. Thereafter John Newton walked with a limp. Later he became a Christian, and every limp was a reminder of God's matchless grace to a wretched sinner. His the composer of 'Amazing Grace,' as well as hundreds of other hymns."
Posted by Rod Mann