Their Aspirations Must Be Met!

As I listened to the news Thursday Feb 10th  and heard President Obama’s remarks regarding President Mubarak’s decision to not leave office. I was struck by his words. To better illustrate my thoughts I’ve made three substitutions to the text of his remarks shown below; Egypt to America, Egyptian to American, and United States to the administration. 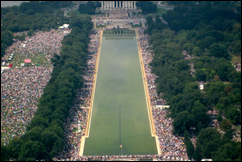 “As we have said from the beginning of this unrest, the future of America will be determined by the American people. But this administration has also been clear that we stand for a set of core principles. We believe that the universal rights of the American people must be respected, and their aspirations must be met.  …

“The American people have made it clear that there is no going back to the way things were: America has changed, and its future is in the hands of the people. Those who have exercised their right to peaceful assembly represent the greatness of the American people, and are broadly representative of American society. We have seen young and old, rich and poor, Muslim and Christian join together, and earn the respect of the world through their non-violent calls for change. …  They have made it clear that America must reflect their hopes, fulfill their highest aspirations, and tap their boundless potential. In these difficult times, I know that the American people will persevere, and they must know that they will continue to have a friend in this administration.” 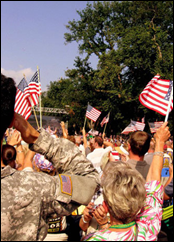 I heard him speak and thought Obamacare. I considered the numerous peaceful Tea Party and 9/12 rallies. I envisioned +300,000 people on the mall listening to how they must change and be better. Then I thought about the administration’s and its allies’  reaction: AstroTurf, bigots, racists, extremists, uninformed … .

So let me understand, when citizens of another country peaceably protest they are applauded and their government is chastised if it doesn’t respond but when Americans, in significantly larger numbers, protest they are demeaned, vilified and marginalized by the administration and mainstream media. Should not our aspirations for a smaller federal government constrained by Constitutional limits also be met? After all according to polls (and the results of the last election) we represent a majority of the citizens.