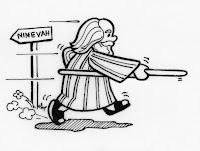 Most of us are familiar with the story from the Old Testament of the prophet Jonah who disobeyed a request from the Lord to call upon the people of the city of Nineveh to repent. Rather than go to the city he ran the other way.
Some think that if the Lord spoke to them, or they had a great vision, or some other dramatic event that it would be easy to believe and obey. Yet here was a prophet who ran way when told by the Lord to do something. The children of Israel, who were led out of Egypt and experienced many miracles, were quick to fall away.
So what does it take to become converted and conform our activities to the will of our Father in Heaven. I'm not entirely sure but a story from I Nephi 2 and 3 does provide some insights. Lehi, a prophet who lived in Jerusalem around 600 BC was told by the Lord in a dream to leave his home and take his family into the wilderness because the people of the city were angry with him and wanted to take his life.
Lehi, did as the Lord commanded; gathered his family, took provisions and tents and traveled into the wilderness. Lehi's family consisted of his wife Sariah and his sons Laman, Lemuel, Nephi, and Sam. When they found a suitable place to "camp" they stopped for a while. Laman and Lemuel were unhappy with the decision to leave the comforts of theie home (Lehi was a wealthy man) and let their dad know about it. Nephi, was an obedient son but I'm sure also in the back of his mind there were questions. However, unlike Laman and Lemuel he did not complain and whine but rather he prayed to the Lord for understanding. "I did cry unto the Lord; and behold he did visit me, and did soften my heart that I did believe all the words of my father; wherefore, I did not rebel against him like unto my brothers."
Afterward he shared with his brothers his experience. I can hear him excitedly saying something like the following: "Hey guys, guess what? What our father told us is true! I asked our heavenly Father in prayer and He let me know that it was true.". Sam, Nephi's younger brother believed, but Laman and Lemuel his older brothers did not. I can just hear them. "What do you mean the Lord talked to you? You're just making that up. Why wouldn't he have told us? You're crazy! ... ."

If you are LDS you know the rest of the story. Laman and Lemuel continued to rebel. Although they occasionally repented (always under duress of some kind) they reverted to their selfish natures and sought to take Nephi's life. The Old Testament is replete with the same kind of stories of people hardening their hearts against the Lord and refusing to adhere to even the simplest of counsel (see Numbers 21: 4-9 & I Ne 17:41). Perhaps, humility and a desire to understand is the key. The humility that Nephi showed when he did not really understand or entirely believe his father and prayed for understanding. He wanted to believe and asked for help and the Lord softened his heart and then shaped Nephi into a tool that He used.

An object lesson that can be used if you want to teach this lesson to your children is to take about a 1/4 of a cup of baking powder mix it with a little water, enough so that if you slowly stir it, maintains the constancy of a thick shake. Pour some in your open palm and move it around. As long as you agitate the mixture it will remain hard. If you hold your hand still it will become soft. When Laman and Lemuel (as well as the Isaelites) agitated against the Lord their hearts hardened. Nephi on the other hand took the time to quietly reflect and pray. His heart was softened and  the Lord was able to influence him in a lasting way.
Posted by Rod Mann