Is Matheson In Step with Utahns?

I thought it would be interesting to look at how a liberal group rated our congressmen so I went to the website for Americans for Democratic Action (ADA) and looked at their annual rating for house members from 2001 to 2009. Over the course of that time period the average democrat was given an 86% by the ADA. Jim Matheson had an average rating of 66% so he was rated as more conservative than the average democrat. Contrast this with the ratings of the 1st (4%) and 3rd (2%) district representatives (Hansen/Bishop and Cannon/Chaffetz respectively) for that time period and you can see how out of step Matheson is with the our other congressman. I wonder which of the 3 our more closely aligned with the average Utahn. You can be the judge but it seems to me that Mr. Matheson is much more aligned with liberals than conservatives. 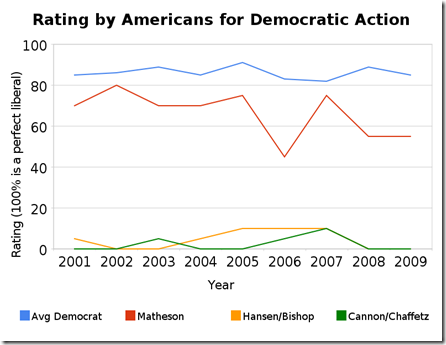 I also found it interesting that  in 2006 and 2008 Mr. Matheson’s liberal rating took quite a tumble. Let me see, were those election years?

I believe Morgan Philpot is more closely aligned with the largely conservative members of the 2nd Congressional District. Let’s make sure he is the one that represents us going forward.