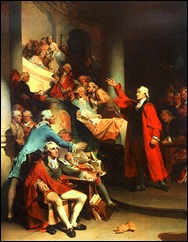 William George Jordan (1864-1928) was a noted author and editor but he was perhaps best known in the early 1900s for his contribution to national politics which began with the publication of a pamphlet entitled The House of Governors in 1907.

In the latter part of 1906 and early 1907 President Roosevelt and his Secretary of State Elihu Root advanced the notion that the Federal government needed to be given more power to deal with issues of national concern that the states were unable to resolve[1]. It was this threat that prompted Jordan to action.

Jordan came up with the idea of creating an entity composed of the governors of the states that would provide a forum for the states to resolve issues between themselves and push back on the Federal government. He shared the concept in February of 1907 with President Theodore Roosevelt, his cabinet and the governors of all 46 states when he sent them copies of his pamphlet. By May of 1908 thirty governors had endorsed Jordan’s plan.

The opening of The House of Governors reads as follows:

“The atmosphere of political thought in the nation today is permeated with restless rebellion of protest against the growing centralization at Washington. Rumblings of revolt in the public press are becoming louder and more unmistakable, and political leaders are furbishing the dingy armor of States rights in preparation for battle. The usurping by the government of the lawmaking power of the States is declared to be a forsaking of the great principle of democracy, the rock upon which the fathers founded the Republic.

“The Federal Government, following the spirit of the age, is itself becoming a trust—a great governing trust, crowding out, and threatening openly still further to crowd out, the States, the small jobbers in legislation. As the wealth of the nation is concentrating in the hands of the few, so is the guidance of the destinies of the American people becoming vested in the firm, tense fingers of a small legislative syndicate. The nation soon will be no longer a solid impregnable pyramid, standing on the broad, firm safe base of the united action of a united people, but a pyramid dangerously balanced on its apex—the uncertain wisdom of a few.”

“We need in our country today less politics and more statesmanship, less party and more patriotism. We need an awakening to higher ideals. We need a higher conception of America's place and destiny in the evolution of the world. We need something nobler as a purpose than our self-satisfied complacency at the material prosperity of the nation, for there is a moral and ethical success that is never rung up on a cash-register. We need the scourging of the money changers out of the temple of legislation—State and national. We need a purifying and ennobling of the body politic. We need the clear clarion voice a great inspiration to rouse the States to their duty—not the gilded phrases of mere rhetoric, but the honest eloquence of a high and exalted purpose like that ringing speech of Patrick Henry's, a century and a quarter ago, which breathes the very spirit of the present hour of need when it is said that the States are too weak to do their duty and must surrender to government centralization:

‘They tell us that we are weak, unable to cope with so formidable an adversary. But when will we be stronger? Will it be the next week or the next year? Shall we gather strength by irresolution and inaction? Shall we acquire the means of effectual resistance by lying supinely on our backs and hugging the delusive phantom of hope until our enemies shall have bound us hand and foot? Sir we are not weak if we make a proper use of those means which the God of nature has put into our power.’[i]

“Whatever tends to lessen the right of the American people to be absolutely self-governing, whatever tends to take from eighty million people their privileges and to hypothecate them in the hands of a few, is a menace in principle, hazardous in what it portends and in what it makes possible.

“The plan of the House of Governors is simple, seemingly feasible, cannot possibly do harm and may have within it the germ of great good. Is it not worth a trial?”

[i] “Give Me Liberty or Give Me Death”, Patrick Henry, 23 Mar 1775. Speech to the Richmond Convention composed of Virginia State delegates defending his resolutions to form a militia and put the colony in a state of defense.

In May of 1908 Jordan told a Times reporter that “There are three basic weaknesses to our present system of government. The first is the menace of centralization, the Federal Government usurping the rights of the people; second, the uncertain shifting, undignified status of State rights, and, third the lack of uniform legislation on vital questions throughout the union.”[2]

In 1908 President Roosevelt called for and presided over a 3-day conference with most of the governors of the states and territories. The purpose of the conference was to begin a discussion on determining the best methods for developing and conserving the nation’s natural resources. This was the first time a president had met with all the governors.[3]

The first formal meeting of the “House of Governors” or Governors Conference as it came to be known was not held until January 1910. At the conclusion of the conference the governors voted unanimously to give “Mr. Jordan its thanks for his enterprise in initiating the movement and carrying it to an organization.”[5] Later in the year he was appointed the group’s permanent secretary. However, by September of 1911 the governors determined that they no longer needed a permanent secretary and released him from this role with their thanks. 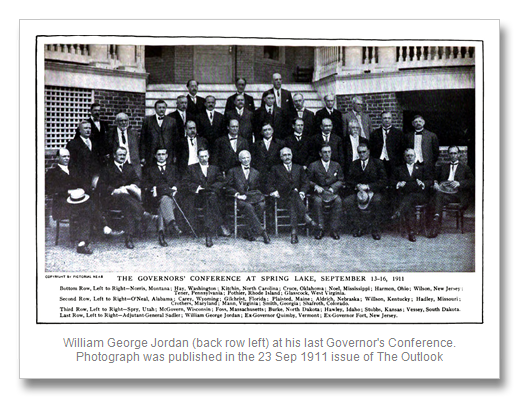 The most likely reason for the termination of his role as secretary was that while he pushed for the organization to fulfill the mission he originally envisioned many of the governors wanted to use it as a platform for promoting their presidential aspirations. They were interested in form while Jordan was always about substance.

William George Jordan’s role in establishing the Governors Conference, now known as the National Governors Association, was the subject of many newspaper articles in the early 1900’s. Today, Jordan’s influence has been largely lost to history. The organization he hoped would be a bulwark against Federal expansion did not fulfill that role.

You’ll notice that the words he used to establish the need for a “House of Governors”, especially his closing comments, were seemingly written for today. Clearly, the states need to refurbish “the dingy armor of States rights in preparation for battle” while the citizens need to need to scourge “the money changers out of the temple of legislation—State and national.” We need to elect good men to office who are more motivated by a desire to restore the sovereignty of the states and the liberty of the people than personal power; men and women who are of strong moral character and will resist, with our help, the siren’s lure of fame and fortune.

You can view a scanned copy of Jordan’s original 1907 pamphlet or a transcription of it by clicking on one of the two following links: Scanned Original, Transcription. 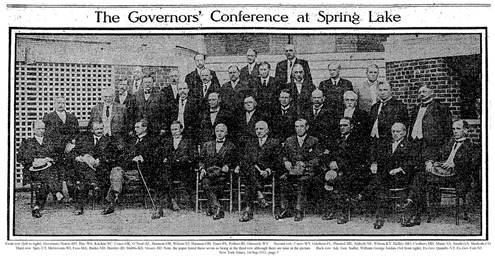 New York Times, 14 Sep 1911. WGJ can be seen in the back row (3rd from the right) at the Sept 1911 meeting which was hosted by Woodrow Wilson (bottom row, 4th from the right) in Spring Lake, New Jersey. 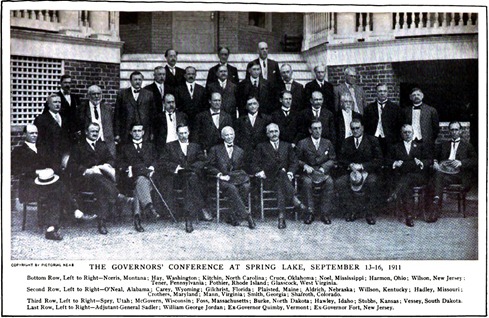 A better picture from the same setting from Sept 23rd 1911 issue of The Outlook. 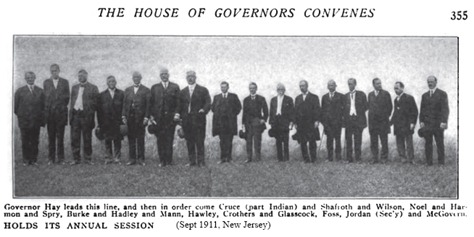 Current Literature, October 1911. WGJ, 2nd from the right. His physical stature belies the power of his words and the influence he wielded. 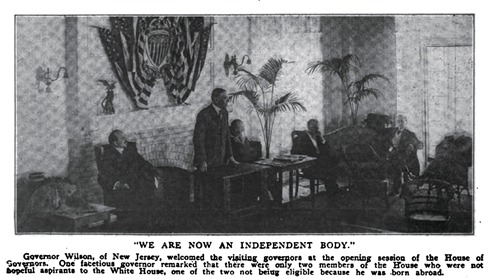 This picture is from the same article as the previous one. WGJ could be the person sitting and taking notes at the desk on the left, a likely activity for the then secretary of the organization.