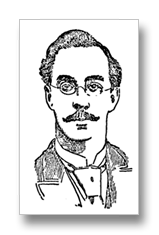 William George Jordan, was a strong advocate of changing the focus of education. In an article entitled “What’s the Matter with Education”, published in the March 1923 issue of The Forum, he argues that “there is not one single power, faculty, process or quality of the mind that is trained and developed by our present system of education. Our powers are not merely untrained—they are positively mistrained.” He continues “the theory of education, not as we get it from the ideals of educators but as it is evidenced in every detail of the system as it actually exists today, can be given in a single sentence: Education believes that by forcing a certain amount of knowledge, principally by means of textbooks, into the minds of children, that somehow in the divine mystery of mental processes this knowledge will not only be retained, but the mind of the individual will be exercised, trained and developed.” He advocated for a system whose “final aim … is to teach thinking, exercising the individual not in what to think, but in how to think … .”

Jordan began lecturing on his philosophy of education at least as early as Feb 1890 as per the following note that appeared in the Feb 8th, 1890  issue of The Critic:

“A series of ten Lenten [definition: suggesting Lent, as in austerity, frugality, or rigorousness; meager] on the simplicity of the mind and its workings is announced by Mr. William George Jordan, editor of Current Literature.”

During July of 1891 he visited with a newspaper writer in Chicago and discussed his thoughts on education. A summary of this discussion was published in the Sunday, July 26, 1891 issue of the Chicago Inter-Ocean. The following is a short excerpt from this two and a half column article.

“In explaining this theory Mr. Jordan says that the present system of education is a failure, because it does not strengthen the mind and develop the individuality. He adds: ‘The common school system of to-day gives the child but an accumulation of facts. For years it feeds the minds of the child with learning that the mind is not trained to digest.’”

On September 15th of 1891 the Chicago Inter-Ocean ran an article that said Mr. Jordan would be coming to Chicago in October to lecture on education and mental training. Two weeks later (Sept 24th) the same paper ran a story that said because of the significant interest in his educational theories Jordan would be resigning from his post as managing editor of Current Literature to relocate to Chicago. As a parting note Current Literature included the following in its Nov 1891 issue:

“Mr. William George Jordan, associate editor of this magazine from its inception almost, has resigned his editorial position and gone to Chicago to establish there, through lectures and classes in Analysis and Analogy, his system of Mental Training. Chicago has taken most kindly to the new idea of a gymnasium for the mind, and given Mr. Jordan the most substantial sort of support in the way of promised classes and lecture patronage in the development of his plan. Discussing Mr. Jordan's determination to locate in Chicago the Inter-Ocean says: “It is an assured fact that mental training will be the rage here this winter. Unlike most fads, it has a solid basis and will live as a system. Never before has the mind been presented in all its workings with the clearness, the simplicity, and the practical treatment it will receive in these lectures.” Mr. Jordan is a young man—but twenty-seven—a graduate of the College of the City of New York, a student and a scholar, a clever writer, an editor of taste and judgment, and, in his special line of educational thought, possessed of the widest sort of ability. While regretting his loss to Current Literature, we congratulate him on his emancipation from the drudgery and the general thanklessness of editorial work, and heartily commend him to the Western people in the restful assurance that, be his proposition ‘fad or philosophy,’ its demonstrator is thoroughly in earnest as to its usefulness, and honest as to its practical worth.”

The evening of October 20th found Jordan at the monthly dinner of the The Forty Club where he was one of several speakers, including well-known humorist Bill Nye, who provided light-hearted entertainment.

By November he had arranged with two society groups to hold classes for their members and was planning more public lectures for later in the the “season” (see The Chicago Inter-Ocean, Nov 9, 1891). He initially held a series of 10 lectures with the following titles:

Although, these lectures garnered some critical acclaim he was drawn back to the publishing word in 1894 and once again became the managing editor of Current Literature. From there he joined The Ladies Home Journal as managing editor and subsequently was asked to be the editor of The Saturday Evening Post after it was purchased by Curtis Publishing. He went on to write, in what my opinion are, five of the all-time best self-help/motivation books (see Books by William George Jordan). While he was involved in political, civic and business organizations, and had his own publishing company, his endeavors were always centered on improving the lives of others.

William George Jordan maintained a interest in educational reform throughout the remainder of his life. In 1907 he published a second edition of Mental Training: A Remedy for “Education.”  By then he had updated his lectures to consist of the following:

As far as I can tell his last written remarks on education were published in 1923 by The Forum in a four part series of articles; What’s the Matter with Education, Educating for Seven Lives, Modeling Education on Genius, and Mental Training: a Remedy for Education. Jordan, aspired to write a book that thoroughly covered his thoughts on this subject but he never had the time to do it. I suspect that each time he lectured on the topic he learned more and thus he was never able to encapsulate his ideas as they kept expanding. These final four articles are probably the best representation of his views.

He concludes the series with the following statement:

“In closing this series of articles two questions are of supreme importance: ‘Is preparing and training the individual for the seven lives he must live [physical, mental, moral, social, civic, emotional, spiritual] a sufficiently broad, practical conception of what education should accomplish?’ ‘Is there a possible higher ideal or a more basic foundation for such training than making genius the revelation and the model for true education?’ If the answer of the thinking public be one of approval, then the co-operation of educators can transform this vision of what might be into an actuality, this dream into a reality.”

As you review his thoughts you may find, as I did, that many of his critiques of the education system of his day and his proposed solutions are applicable in today’s world. Below are some of my favorite quotes from William George Jordan on education / mental training:

As an interesting footnote to this post, The New York Times ran a brief article in its June 17, 1907 issue regarding a debate that was held between a Dr. Hervey and Mr. Jordan regarding the value of college training. You can guess which side Jordan took.

Below are links to articles and publications related to William George Jordan and “Mental Training or “Education” most of which I used as sources for this post. The last four articles, published as a series in The Forum, were his final written thoughts on education (he died in 1928 at the age of 64). I’ve combined these into a single document entitled, “Education: Problems and Possibilities”.