About 20 residents from the Dry Creek and Bull River neighborhoods met with council members, the mayor, and city staff to discuss issues with the Dry Creek/Bull River trail (a portion which was closed last fall). 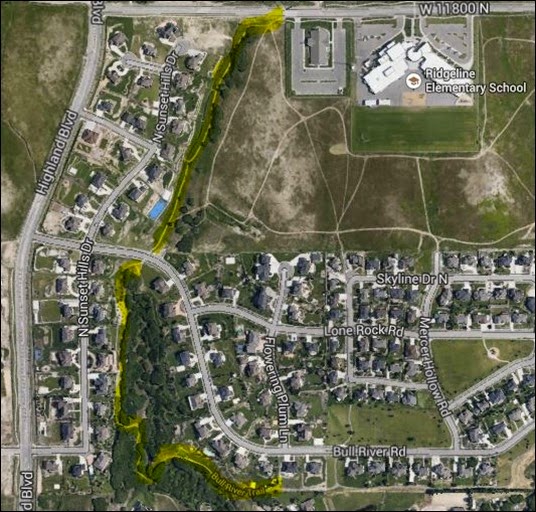 In September of last year the council agreed to close the east/west portion of the trail (on the bottom of the map above) until it could determine the best course of action to deal with the fact the trail on that segment was built off the easement and on at least two home owners private property. The east-west portion of the trail is a neighborhood option trail which at the request of the neighborhood can be removed.

What we learned at the meeting was that north-south leg of the trail was also constructed on private property. The city subsequently had a survey done for this portion of the trail which shows that the trail encroaches on the land of 11 home owners. In addition to stealing their land this also creates a liability issue for those residents. 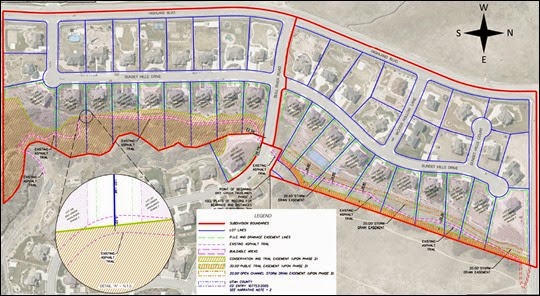 You might ask how is it possible that this trail was constructed on private property rather than in the designated easement. I did. There is really no good answer. More than one person had to have dropped the ball. It is easy to understand why the trail was built where it was. It was less costly. Who is at fault? Well the developer built the trail but the city signed off on the project. So my opinion is that the city now owns the problem. But when I say city I don’t just mean city staff and/or elected officials I mean all of us. Most of the city’s money comes from us and this problem will cost money to fix. Money that will not be able to be used elsewhere.

Here are the options as I see it:

At present we don’t have solid estimated for any of the options. We did have one estimate to relocate the east-west portion of the trail which was $100,000+.

One of the residents asked a very good question. If you relocate the trail or purchase an easement will you (we) spend or do you (we) have the money to maintain it?

The mayor took a straw poll at the end of the meeting. Here are the results:

If you have any thoughts or suggestions please share them as comments on this post or email them to the city council and/or mayor. Remember the trail was built on private property so the owners have to be part of the solution.