After our last couple of meeting that had very full agendas and went late it was nice to have a limited agenda meeting that ended before 9 pm. 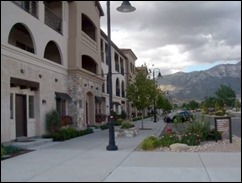 We did hold a short work session (less than 1 hour) prior to the council meeting to discuss potential town center changes. The discussion basically centered on presenting a summary of our discussion from last time and then outlining possible directions for moving forward on Town Center Zoning (click here to see the presentation). The initial conclusion from the 1st meeting is that:

Note, only one member (Tim Heyrend) of the planning commission attended this work session.

My personal observation is that there are number of town center objectives that are in conflict with each other. Including the following: