About 30 people attended the meeting. Most were there to participate in the discussion on a rezone request for 7.25 acres of land located in the northeast quadrant of Highland. One of the most interesting items on the agenda was the library report. The other was the Utility Rate Study update.

As a preamble to the meeting notes I would like to give some background and share personal thoughts relative to the Utility Rate Study underway which will recommend rate increases for each of the utilities. Please note that since I am publishing this so late I’ve included the utility rate data from the May 3rd council meeting which has the final recommendations (see item 10).

My Perspective On the Utility Rate Study

There are charges that appear on each of our utility bills which generate revenue for the following enterprise funds: 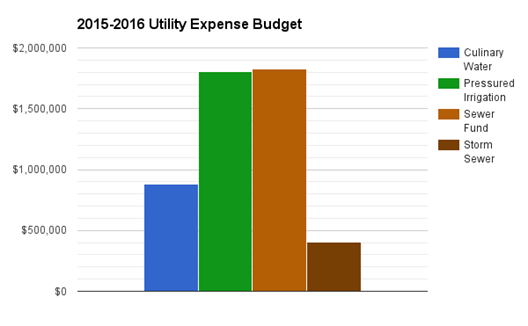 Each fund is managed as a separate entity with its own revenue source and expense items (personnel, maintenance, and capital expenses). By law the city cannot use excess cash from these funds for general fund expenses (roads, parks, police, fire …) unless the council approves the action and the transfer is treated as a loan. Note, enterprise funds may be transferred to the general fund without the payback requirement if the council goes through the notice and transfer requirements required by state law. The council can transfer cash from the general fund to an enterprise fund but has not done so for at least 5 years.

Over the last year city staff has produced 10 year maintenance and operation plans for each of these enterprises. These were reviewed and approved by the council, often after much discussion. These included not only projected maintenance costs (e.g. pump rebuilds) but also anticipated capital expenses (pump replacement, sewer line expansion …) Our instructions to staff on approving each of these was to review and update these on an annual basis.  Note, if you go the end of any of these plans you can see a summary of the maintenance and capital expenses in table form.

After reviewing these plans it was quite obvious that a rate study was warranted and we put a bid out to have the study performed by an outside firm. Zion’s, who performed our impact fee study, won the bid and the study is nearly complete. The study used the approved plans as input and looked at each fund from the standpoint of what rate will be required for each fund to maintain a sufficient reserve and cover the planned maintenance and capital expenses. Zion’s provided both a pay as you go model and a model where 20-year bonds were used to create a smoother cost curve for residents.

From the outset I vigorously opposed the bonded approach. I also believe that we should take an analytical approach to this rather than a political approach. By this I mean we should see where the numbers fall instead of dictating that they cannot exceed a certain amount because that would be unacceptable to some residents.

As we reviewed the progress of the study, each of the prior approved capital expense items were looked at again. As a result several items were taken off the list such as those related items which would be required solely as a result of development of the state owned land between the High School and the Development Center. Pressurized irrigation meters were also eliminated because of the high cost. Additionally, the installation of chlorination systems at each culinary water well was not moved up (I supported budgeting to be able start this within the next 3 years).

I believe the city council’s obligation is to approve a plan that we deem is in the best long term interest of the city, be sure that this is based on the best data that we can gather and share this with residents. I have endeavored to do this by providing notes on each council meeting and by giving you access to the same data we see. I also believe the most accurate picture is provided by giving you the best estimate we can on how your rate will be impacted in specific dollar amounts rather than simply citing a percentage. Leading with the percentage increase or decrease can create confusion. For example, if I told you a specific rate was going to be raised by 20% you might think that was OK unless the base rate was $250/month. On the other hand you might be very concerned if I told you a rate was being increased by 100% even though the base rate was $2.00.

Note, some have compared a utility rate increase to a tax increase. I suppose that if you think of it as “the government” getting more of your money then that could be true. However, unlike a tax it is not a crime to get behind on a utility bill. Your water can be shut off (not sure how your sewer can be shut off) but the city cannot take your home. I think a more fair comparison is to your electric bill, which by the way has increased by about 4.3% per year for the last 10 years. Our last utility rate change was in 2011. From my point of view the utilities are a government owned business (scary, I know) which needs to break even each year plus have a sufficient reserve to handle unforeseen expenses and planned maintenance and capital expenses. Any increase is a cost of living increase but no different in my mind than an increase in the electric power rate.

If a utility fund does not have a sufficient reserve or enough cash to pay for planned expenses then I believe it is our responsibility to revise rates to ensure it does. The PI reserve fund currently stands at  $520. Not much for an enterprise that spends $1.8M per year. So even if we had no maintenance or capital expenses to save for we would still need to raise PI rates.

Fun Facts RELATED To The Utilities

By the way city staff and put together an excellent summary of why the rate study is being conducted, where we are at, and what the next steps are in the process. Click here for details. I appreciate the effort that they’ve made to be transparent. I know this is a an issue which concerns many residents. I personally welcome any input and especially appreciate it when people do their homework first.

Click to open up a separate window to view the chart and data in Google Sheets. 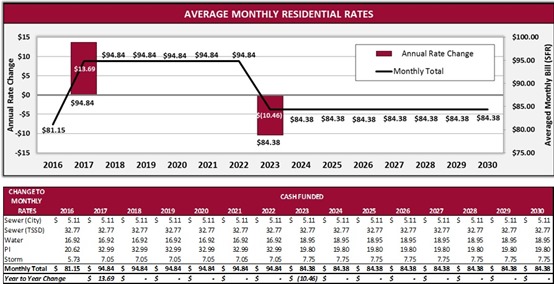