The 400th Anniversary of the Mayflower 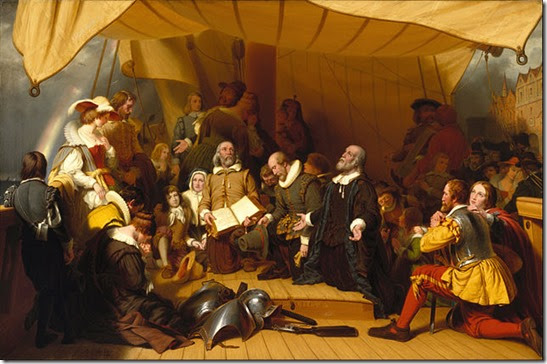 400 years ago, this December, the Pilgrims landed at Plymouth Rock where they would build a settlement that would be a founding pillar of our great nation. They experienced many hardships; over half of those who landed initially died the first winter. On the other hand, there were miracles as well, such as Squanto, an Indian they encountered in 1621, who just happened to speak fluent English and served as an interpreter between the Pilgrims and Indians.

While their challenges were immense, their achievements have shined for centuries. Calvin Coolidge closed a speech on the 300th anniversary of the Pilgrims’ landing at Plymouth with these words:

“Plymouth Rock does not mark a beginning or an end. It marks a revelation of that which is without beginning and without end—a purpose, shining through eternity with a resplendent light, undimmed even by the imperfections of men; and a response, an answering purpose, from those who, oblivious, disdainful of all else, sailed hither seeking only for an avenue for the immortal soul.”

Perhaps, in the future similar words could be penned those of us who persevered through the challenges of our era with shining purpose. We have many positive examples of cheerfully leading others through difficult times such as President Russel M. Nelson’s request for us to:

This Thanksgiving season I am so thankful to live in a community filled with wonderful people who by their actions make it a great place to live, grateful for good friends plus a wonderful family who have blessed my life, and most of all for a savior who sacrificed all that we might have eternal life.