Highland City Proposition 1: Shall the city sell 1.1 miles of existing city trails and 5.8 acres of open space in the Wimbleton subdivision

In December of 2019 the city council voted 3 to 2 to surplus 1.1 miles of trail in the Wimbleton Subdivision and sell 5.77 acres of adjoining open space. Subsequent to the vote a group of residents filed to refer the decision to voters. They collected 1,857 signatures in support of this effort, many more than the minimum required. As a result of their work Proposition 1, which asks residents whether or not they support the council decision,  is listed on this year’s ballot (click here to read the Voter Information Pamphlet for a detailed description).

I believe the council decision contained a fatal flaw (which I will discuss later) and will be voting AGAINST the proposition. The post below provides an in-depth review of the issues along with my perspectives.

Below is a map showing the trails under discussion. The yellow trails are the ones being sold. The six separate purchase segments are identified with a unique background color (red, orange, green blue …). Note, if you click on the green arrows a picture taken at that point will be displayed (the direction of the arrow identifies the direction of the picture.

Pictures taken Oct 13, 2021. Started on NW corner of the system and walked the perimeter in a counterclockwise motion (these are the pictures shown in the map).

Pictures taken Feb 24, 2021. Started on NW corner of the system and walked the perimeter in a counterclockwise motion.

Over the years I have reviewed the information provided by those requesting to purchase the land behind their homes and rationale to do so. Here is a brief summary of my thoughts to the arguments supporting the sale:

Trails and open space are one of the most highly valued amenities in Highland. If we sell them, we won’t get them back. My preference is to continue down the path we are on which is addressing the maintenance issues for trails and open space for all Highland residents. If is OK to remove them in Wimbleton for the reasons listed above then it is OK to remove them everywhere.

Finally, even were I in support of abandoning the trails and open space, the approach approved by the 2019 council has a fatal flaw. The flaw is that in order to circumvent the all-or-nothing policy to the sale of contiguous open space they approved a plan that breaks the open space and trails into 6 sections; each of which can be sold independently, provided homeowners agree to purchase all the land in a section. There are homeowners who aren’t interesting in purchasing. The city will end up owning  a broken trail system which provides little, if any, value to Highland residents.

Please join me in voting AGAINST Proposition 1 to preserve 1.1 miles of trail and 5.77 acres of open space, avoid breaking a functioning trail system, and not setting a precedence that could be used to justify eliminating trails and open space in other parts of our city.

Rebuttal to the argument supporting the sale. Submitted by Kathleen Roberts

Wimbleton’s trails and open space are used by the public for travel and recreation – children use the trail to walk to school and parks. Much has changed since the 2019 council decision to sell 5.8 acres of open space and remove 1.1 miles of trail.

The approved plan divides the trail into 6 sections. If a homeowner adjacent to any section elects not to purchase, then this section of trail cannot be sold, thus creating a fragmented trail system and reducing the expected revenue.

Rebuttal to the argument opposing the sale submitted by current council member Scott Smith, former council member Ed Dennis, and current council candidate Colby Gibson [a current candidate for city council], Bruce Braithwaite, and Mark Hafen. My inline comments to the rebuttal are italicized. Click here to read my comments on Do Not Sign the Petition flyer the was mailed while referendum signatures were being collected.

Selling this trail generates large funds to improve other parks and trails, resolves years of subdivision concerns, and will prevent a tax increase to rebuild trails.

Selling the trail will generate some money but how much is unknown because we don’t now which of the 6 segments will end up being sold. Additionally, we don’t know if the city will need to build a storm drain sump to replace detention basins which could be sold. The approved 5-year trail plan is funded with current revenues (mostly from a county sales tax dedicated to transportation). The council has not discussed any tax increase to further improve the trails.

Does this set a Precedent?
NO. This only applies to the perimeter trail in the Wimbleton Subdivision.

Can the proceeds be used for other trails and parks?
YES. Over $600,000 would be available which is five times the amount of yearly funds available for trails from the County gas sales tax.

Any one-time funds generated from the sale could be used for capital improvements in other parks. $600,000 represents an unrealistic best-case scenario. The council agreed to divide the trail system into six segments. Each segment can only be sold if adjoining residents purchased the entire segment. My understanding is that from one to four of the segments have adjoining residents that do not wish to purchase the trail and open space. Moreover, two of the segments contain water detention basins which if sold would need to be replaced by sumps constructs at the city’s expense and selling another segment would require the relocation of a pressurized irrigation line.

Note, the phased approach shown below was used to circumvent sections 12.30.090.B and 12.32.090.B of the Municipal Code which state:
”All of the property designated for disposal shall be purchased so that there are no isolated parcels to be owned and/or maintained by the city. If one or more parcels of city owned property in a subdivision is not purchased, then all the city open space property in the subdivision cannot be disposed of under this ordinance. The City Council may approve exceptions to this requirement if the City owned property can be accessed without the need to cross private property.”
Absent the phased approach if any piece of the trail was not purchased none of it could be sold.

Does it really make sense to sell an existing city asset to fund the improvement of others? Would we sell a road that is used to fund the construction or maintenance of another? 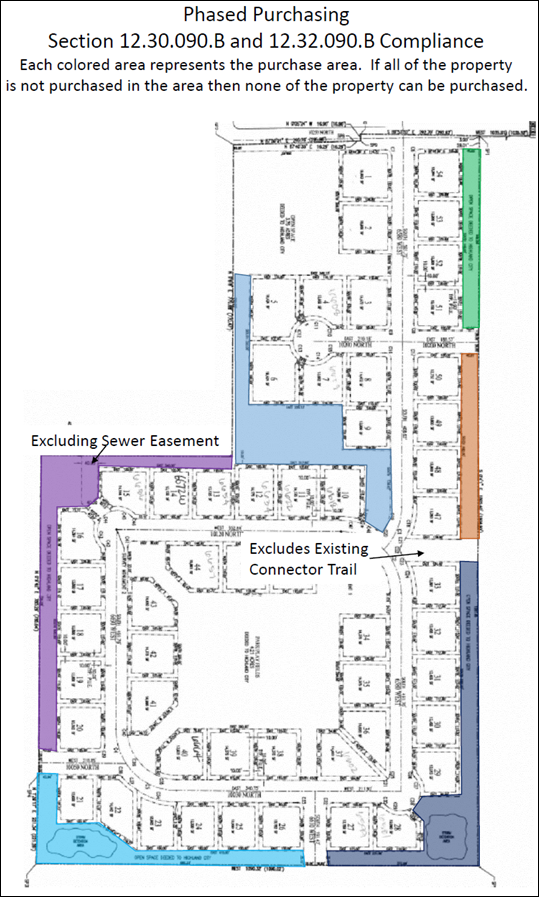 Was this Resolution Legal?
YES. The City’s Council decision was legal and met the requirements of Utah State Law (then and as amended).

(a) good cause exists for the vacation; and
(b) neither the public interest nor any person will be materially injured by the vacation.

The council did neither in the motion to sell the land. This is a technicality that could be remedied by the current council if Proposition 1 passes. Personally, I don’t believe good cause existed then or now. However, if the council decision is ratified by the voters then it would imply that the public believes good cause exists and the council would most likely vote that good cause did exist.

Is the Price Fair Market Value?
YES. The City Council approved the selling price based on comparable values for undevelopable landlocked property.

The council did approve the selling price at 20% of the county assessed value of adjoining property ($2.45 a square foot). Whether or not that is the fair market value is subjective. For example, in order to build Canal Blvd the city purchased undevelopable landlocked property for about $10 a square foot.