Of Freedom, God, and Christ #2 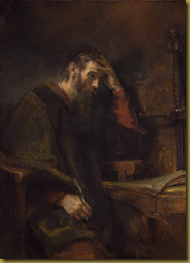 In his letter to the Galatians Paul tries to dissuade Jewish members of the Church from following the strict practices of their former faith (the Mosaic Law)  and insisting that other gentile (non-Jewish) members do the same.  Towards the end of his letter he makes a very bold statement “Stand fast therefore in the liberty wherewith Christ hath made you free, and be not entangled with the yoke of bondage” (Galatians 5:1). The Mosaic law with its emphasis on obedience and sacrifice was a preparatory law that laid the foundation for the higher law and pointed to Christ’s atoning sacrifice.

The higher law was articulated by Christ in the sermon on the mount (Matthew 5-6 especially 5 verses 17-18, 21-48) where He teaches us that rather than simply obeying the commandment “thou shalt not kill” we should avoid being angry with our brother; that rather than not committing adultery we should not look at a woman to lust after her.

Yes, Christ’s sacrifice freed us from the necessity of following the old law; no longer were we required to offer physical sacrifices. However, we are asked to provide the sacrifice of  “a broken heart and a contrite spirit” (3 Ne 9:20) as we follow a higher law. Rather than simply adhering to a checklist we are asked to continually improve ourselves in ways that are not necessarily apparent from the outside (who on earth but ourselves knows our thoughts). This requires an ongoing concerted effort.

For most of us it is often easier to follow a checklist than to exercise our free will. I see this in the work environment all the time. There are those who when given an assignment give up after they hit the first or second roadblock and return and report that they were not able to complete the assignment because … . They use the obstacle  as a means of absolving themselves of the responsibility to finish a task. Others find a way around roadblocks and get the job done even if it requires that they learn a new skill. My experience tells me that more of us fall into the first category than in the latter. Each time we fail to try to overcome a roadblock we lose an the opportunity to better ourselves. Over time the problems solvers gain experience and in general are given broader responsibilities.

Christ is telling us not just to obey the Ten Commandments but to go beyond them and use our initiative to find ways to do good to mankind; that we may over time (clearly not in this life time) become “perfect even as your Father which is heaven is perfect” (Matt 5:48).

Perhaps we don’t always take the time to work around obstacles because we are a bit lazy or because rather than take a risk in doing something different we find it easier to do nothing. This may also be why we find it easier to say the government should resolve our problem or our neighbors problem rather than for us to spend some of our own time and resources helping ourselves or others.

If we give to the ownership of our problems to someone else then we lose the opportunity for personal growth, diminish our freedom, and implicitly grant them more control over our lives. Pushing a problem on someone else (the government) is the seemingly easier route to take and is often positioned as the morally correct thing but in end is usually not the right course of action.

My mind wanders to one of my favorite contemporary political quotes by Robert A. Heinlein: “Political tags - such as royalist, communist, democrat, populist, fascist, liberal, conservative, and so forth - are never basic criteria. The human race divides politically into those who want people to be controlled and those who have no such desire.”  Going back to the church members in Galatia, many of them were finding it easier to revert to a proscriptive law than to follow the higher law which asked them to use their own initiative. If we want to follow checklists and listen to those whose seductive message is that we (the government) can solve your problems, do we not run the risk of allowing those who want to control us to do just that?