The following story is illustrative of stories that get lost over time unless they become part of a family’s history by recording it in family journal and it is shared from time to time. I was recently asked to share a story about our family that no one would know. Sadly I don’t think our most of our children would remember hearing it and they certainly couldn’t have read about it (as it hadn’t been written down). 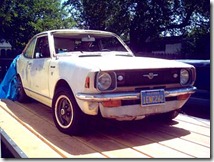 We had been married about a year when we left Provo for Louisville, KY in August of 1981. I had gotten an 8 month internship with GE at their Appliance Park facility. Our car was a 1973 Toyota Corolla hatchback (similar to the one on the right)  that I was somehow able to keep running in spite of my mechanical ineptitude. When it comes to trying to fix mechanical items I instinctively do the wrong thing . I finally gave up trying to work on cars around 1988 after I figured out that it was costing me more money to fix it myself than to take it to a shop. Now, refilling the washer fluid, checking the oil and changing wiper blades is the extent of my repertoire. But I digress so let’s get back to the story.

Earlier that summer I was selected to participate in GE’s internship program. Actually, to be honest, my wife actually gets most of the credit for my being picked. Jim Trafton, the engineering manager who visited BYU to interview candidates held a meeting the night before the interviews to do a presentation on what GE was doing with computer-aided design systems at the Appliance Park facility and what someone could expect to be doing as an intern. Unfortunately, I had to work that evening (I was the night janitor at the admin building) and so Suzanne attended for me. On her way to the meeting she was stopped by a man who asked how to get to a classroom in the engineering building. As it turned out the gentleman was Jim Trafton and so she became his escort. For those of you who know Suzanne you can pretty much guess what happened. They had a great conversation and I think he decided that he wanted to have her come to Kentucky. When I had my interview the next day we spent several minutes talking about Suzanne and a lot shorter time on me after which he told me that he wanted me to come to GE.

Now it was late August, the car was packed and we were ready to go. We weren’t sure the car could make the 1,600 mile journey and so when we said a prayer to start our journey we asked the Lord to bless the car so that it would get us safely to our final destination. After two long days we arrived in Louisville. We spent the night in a motel and in the morning went to where I would be working. Human resources gave me a list of local apartments and after calling around we found one. It was a one bedroom apartment that was located about 3 miles from my office. We drove to apartment, went to the managers office, signed the papers and then got in the car to drive to our new apartment (a big step up from our tiny Provo, residence). As we turned the corner and headed slightly downhill towards our new apartment the engine stopped. We had enough momentum to coast into a parking stall in front of the apartment building and so our prayer was answered but we had a problem.

As we got out of the car another young couple (Lisa & Gary) who had watched us coast in came over and introduced themselves. As it turned out they were also from BYU and were in Louisville on an internship with GE. They had seen our license plate and assumed we might be the same in the same situation. Wow, instant new friends! They helped us unpack and drove us to an auto parts store so that I could buy the right parts to fix the car. All was well. The Lord gave us exactly what we asked for then sent angels, in the form of our new friends, to immediately help us out of a jam.

The blessings continued to come when we found out the next day that GE’s insurance would cover the costs related to our upcoming baby (due in February). We had been saving up money to pay for the delivery and had a low cost catastrophic insurance plan to deal with problems should there be any. Now, could take those savings and use them to build up our tuition fund.

We’ve all had experiences where difficult circumstances “magically” resolved themselves but if you’re like me they are easy to forgot as time moves on and newer more challenging circumstances arise that try our faith. In this case the car breaking down was both a direct answer to a prayer (we got exactly what we asked for) and a blessing in that enabled us to immediately interact with new acquaintances and thus begin a friendship that would last for years. What are the odds that we picked the same apartment complex as Gary and Lisa and what are the odds that they would be walking by us at the exact moment our car stopped running?

Keeping stories like this alive by retelling them and making them part of our family culture is one way to reinforce our personal faith as well as our family’s and friend’s.