After attending council meetings for the last two years my personal view is that the biggest issue facing the city is lack of communication. I have believe those serving are doing their best and have good intentions. And while I may not appreciate the style of some members and don't agree with their votes I appreciate their willingness to serve.

Before I dive into specific examples of where I think the city could to better, l’d like to share a story from a book I recently read on change entitled “Switch: How to change things when change is is hard”, by Chip and Dan Heath.

Researchers studied why college students did or did not donate to canned food drives. They knew that some would be more charitable than others and wanted to see if they could change the behavior of those who did not give.

First to distinguish “saints” from “jerks” researchers polled all students in a particular dorm. They asked them to assess which dorm-mates (out of roughly 100) were most likely and least likely to make a donation. Then one of two letters were randomly sent to each student announcing a food drive. Some received a basic letter asking them to bring canned food to a booth at one of the plazas on campus. Others received a letter that had more details. It included a map showing the exact spot on campus where the food could be dropped off, asked students to bring a can of beans and suggested that they think of a time when their normal schedule brought them near the drop off point.

Once the drive was completed researchers knew exactly who had and hadn't donated food. 8% of the “saints” (somewhat disappointing) and none of the "jerks" (not surprising) who received the basic letter donated. However, 42% of the saints and 25% of the jerks who were sent the detailed letter donated. Wow! Overall participation in the program rose 850% when more explicit information was provided. Better informed “jerks” were 3 times more likely to donate than less informed “saints.” So in reality were those classified as “jerks” just “saints” who did not have enough information? 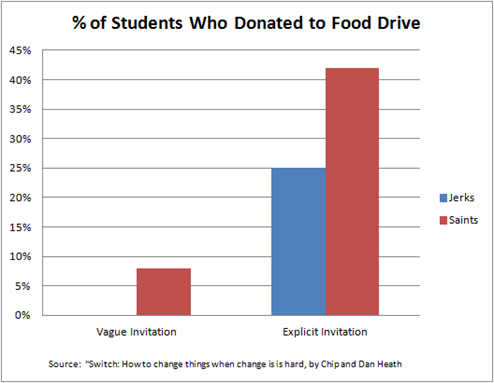 Let me cite a current example where better communication could have made a difference.

Last year, after the council passed a property tax increase with primary objective of improving roads, a group of residents circulated a petition to allow all residents to vote on the issue. Enough signatures were gathered to make that happen but not in time to put it on last years ballot. Because they had sufficient signatures the tax increase was put on hold until it could be voted on.

Now fast forward one year. I wonder what would have happened if the city had made an effort to reach out to those involved in the petition and provide more information to them (and all residents) on the roads, what was needed and what funds were available. Would that have changed behaviors? Could a combined resident, staff, and council budget committee come up with viable alternatives? Would they have been able to share more information with residents and thus engender increased participation in addressing the issue up front instead of instead of fighting a decision after the fact?

The following maps and charts were taken from Alpine City's website and is part of the city’s 2013 Budget Report. It provides a historical perspective on what road work has been completed, what work is planned for the current year and a detailed table of the costs associated with each segment of road to be worked on. 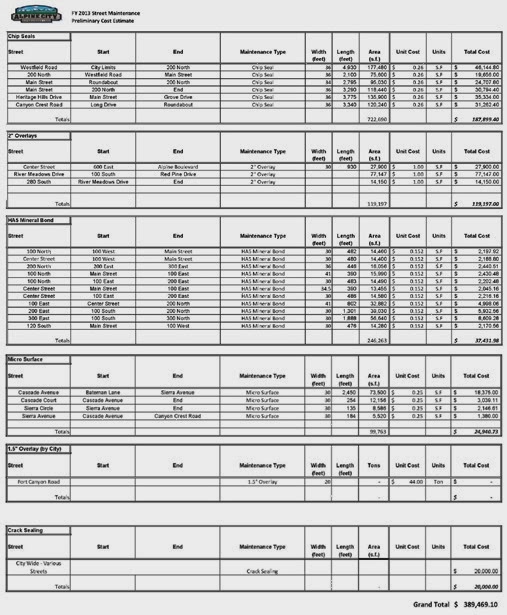 Without a published plan residents have no context for evaluating any single road issue and cannot provide meaningful feedback. When they are operating blind they waste time worrying about issues that are going to be resolved and more importantly cannot provide additional information and insight before decisions are caste in concrete (or asphalt as the case may be).