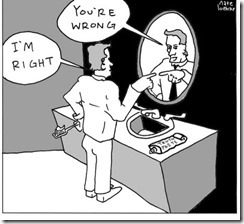 There were 15+ people at the meeting. Not sure if it was because I was still recovering from the flue and that the meeting ran from 6 pm to nearly midnight but I managed disagree at some point with all presenters but one, plus all those offering public comment, all councilmen, and the mayor. I think that has to be a record of some sort. We held a one hour work session focused on the utility rate study followed by a 4+ hr. council meeting. Here is a brief summary of my disagreements. You’ll of course want to read the details that follow.

During the work session we reviewed the work done to date on the Utility Rate Analysis by Zion’s Bank. I would normally share with you the presentation but there were a number errors that were uncovered during the discussion so I will do a brief summary of the preliminary information. Please take any numbers I provide with a grain of salt as they are still subject to change. Here were the assumptions going into the study:

Zion’s provided an estimate of the impact to our monthly utility bill with and without bonding. One of the concerns I had with the estimates was that the rate increase without bonding was steady for 7 years even though the bulk of the capital costs occur in which create a shortfall occur during the next three years (see chart below). My question was why don’t the rates go down when the costs go down. In the bonded (debt) scenario I understand why they don’t go down. Another thing I talked with some council members after the meeting was including a formula in any rate increase that would require rates to decline when we reached an agreed upon reserve (e.g. 275 days operation expense on hand). 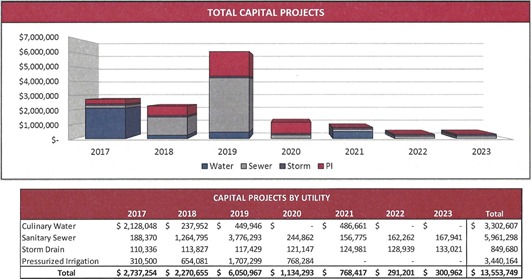 OK here’s the bottom line without bonding we will need to increase our total monthly utility bill around $30 for at least the next 3 years. With bonding the increase would be at least $12.20 for the foreseeable future. Brian’s view was that the residents will not stand for a $30 increase and that we would need to bond.  I am opposed to debt unless absolutely required and would not support bonding rather than raising the rate an additional $18 for 3 years. If we bond we are stuck with a fixed payment for a number of years. If we pay as we go that rate can be reduced when we get out of the current crunch.

Below is a list of neighboring cities and what their utility rates are based on base rates plus using 12,000 gallons of culinary water per month, 9,000 gallons of sewer and a 1/2 acre lot or 16,000 gallons of water in the case of PI. You can see that even if we were to raise our average monthly rate by $30 per month to $111.15 we would still be less than the average of our current neighbors, $112,88. Note, based on the info we have today it is clear that we have been undercharging for a few years which explains why we currently have the lowest rates based in the area.

Click to open up a separate window with Google Sheets.

Please note the final report is due to be completed in March.