Murdock Connector: An Analysis of the 2017 Traffic Study

Another milestone was reached last month when a road study was completed on impact of constructing an East-West Connector. Below is a brief summary of the report, my analysis of the information provided, and suggestions on how you can impact the decision going forward. According to the study (click here to see the report). 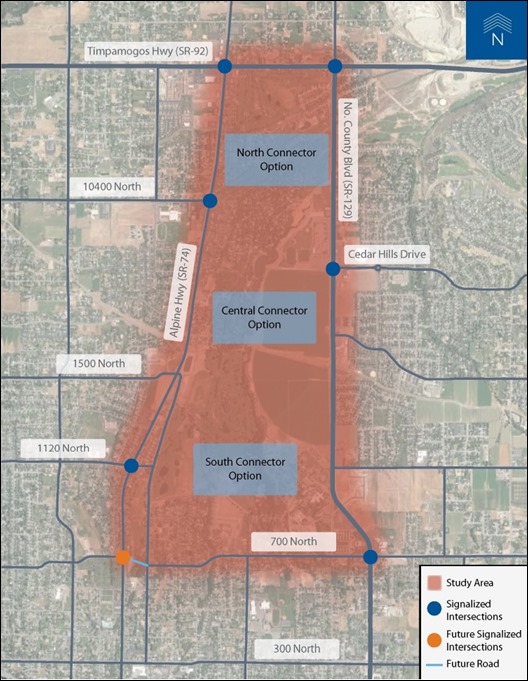 There are issues with each of the locations for a connector which were analyzed (see the map above).

According to the study the central routing will provide the most overall benefit to the local communities. This is the route that Highland City has proposed and that MAG (Mountainland Association of Governments) has funded. The proposed road will connect Alpine Hwy and North County Blvd. The connection on Alpine Hwy will be at Canal Blvd/9860 N. The North County Blvd connection will at Harvey Blvd (just north of Highland Gardens). You can locate these on the Google map below – just follow the top of the state property highlighted in yellow east and west.

The charts below show the impact on three key measures of effectiveness of roads for the central connector option (aka Murdock Connector). Both the initial impact and projected 2040 impact are shown.

In the end if you care about the safety and security of development center residents, care about its employees, visitors and volunteers, want to increase the chances of success for the commercial development that will help fund the center, want to improve the environment, and benefit the surrounding community that strongly supports the center, constructing the Murdock Connector is the right thing to do!

Note, in a Highland City survey taken in January of 2017 of 991 responses to the question do you support the Murdock Connector 79% said yes. The poll has an estimated 3% margin of error.

Below is a map showing the undeveloped state land between the proposed Murdock Connector and the north boundary of the Development Center. It is a 165 acre parcel that is about 0.6 miles long.

What Can You Do?

The following individuals are members of the board:

Let them know your view on the connector and remember your comments will have much more influence if they are respectful.

Our state legislators are (I’ve included the cities they represent which are most impacted by the connector):

They are all good representatives and are willing to listen to your point of view. Don’t be afraid to reach out. Again, whatever your view, please be respectful.

If you support the Murdock Connector please click here to sign an online petition to let our legislators know how you feel – many signers have also left comments.

You may find that reviewing a brief history of the connector (click here) will help in formulating your input to the board or legislative members.