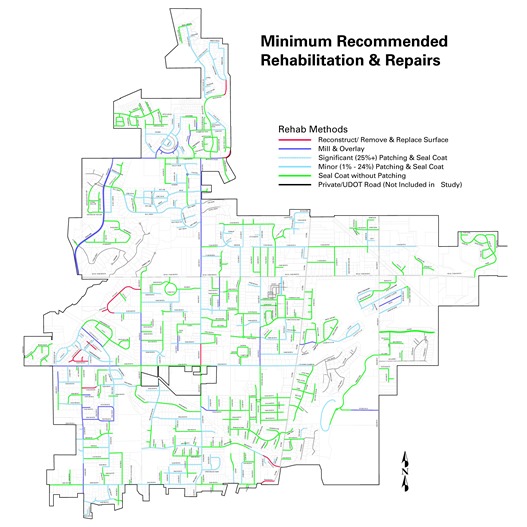 Fifteen residents attended the meeting. Not many considering the nature of the conversation, the Road Fee.

One council member (Ed Dennis) was opposed to both a tax or a fee. His stated rationale was that he was concerned for those on a fixed income and that the city needs to do something different in order to not require residents to pay a tax or fee. What that something was, was not identified.

Brian Braithwaite argued that a property tax was the best vehicle we had to raise revenues on a proportional basis. Think of a fixed percentage of your earnings vs. a flat fee (tithing would be an example of a proportional tax). Tim Irwin, Dennis LeBaron and I favored a fee because everyone with a utility connection pays and all residents pay the same. A fee can also be enacted with a sunset clause whereas a tax cannot.

In the end we approved a $18.50 fee per connection, subject to an annual review, that will end June 20, 2028 (the same fiscal year our last two city bonds expire) on a 4 to 1 vote. Yes: Brian Braithwaite, Dennis LeBaron, Tim Irwin, Rod Mann; No. Ed Dennis.

There was a brief discussion on a 7 year sunset vs. a 10 year sunset. The rationale for the 7 year sunset was that our road plan was a 7 year road plan and therefore we should not collect any money past that date. My view was that once we fixed nearly half of our roads that our maintenance costs will nearly double.($500,000 per year will rise to $1,000,000 per year). In addition to needing another $500,000 for maintenance, inflation will erode the value of the fee over time. Our bonds will paid off in 11 years. It made sense to me to end the fee when our bond payments ended rather than terminate the fee without a source of funds to pick up the increased maintenance costs. The fee is also subject to an annual review.  If after a few years we don’t need as much to fund the roads the fees could be dropped. I see no reason why this wouldn’t happen as the funds collected can only be used for roads and if funds aren’t needed there is no reason to collect them.

City staff put an excellent summary of the road discussion. It includes links to maps that show which roads will be worked on and tables that show what type of treatment will be applied to each road.