One of Senator Hatch’s campaign staff asked me to select another candidate for federal office and do an analysis of their campaign donation sources so they could be compared. I thought it was a reasonable suggestions so I decided to use Representative Chaffetz as a comparator to Senator Hatch. As I did for the Senator I tried to err on the side of contributions coming from Utah when there was subjectivity involved.
Below are charts & tables that summarize campaign contribution data I downloaded from MapLight (a nonprofit nonpartisan organization that seeks to show the impact of money on politics). The data contains all donations for election cycles 2006-2012. I downloaded the data June 13, 2012.
Individual donors are required to provide addresses to campaigns so it is easy to show the source of funds from a location perspective. Note, there just a few donations that had no state listed so I assigned them to Utah.
For PACs it is difficult because if a is PAC set up by a company with a national or global presence then it is hard to identify a specific location. If on the other hand it is a PAC that represents an industry or cause then donors can come from anywhere in the US. For the PACs I went through the list and identified the ones that had I determined had a significant presence in Utah (for corporations I look up where they had offices or plants) then multiplied their donations by 2 to cover anything I missed to come up with the percentage donated that are Utah related. Note, similar to Hatch donations I did not take the time to research all of them but I did look for those that I thought would have a Utah presence first. Also, I generalized the industries for the PAC contributions (e.g. Pharmaceuticals, Hospitals, Doctors, and Medical Devices are categorized as Healthcare) and added a pie chart to the sources PAC donations by Industry.
Aside from the amounts involved there is a stark difference between the mix of donors between Senator Hatch and Representative Chaffetz. Whereas 22% of the individual donor’s to the Senator come from Utah, 69% Chaffetz’s donations come from Utah. The ratio of individual donors to PACs is 55/45 for Senator Hatch and nearly the reverse, 46/54 for Representative Chaffetz. Also, while Jason’s biggest PAC category was Political (mostly conservative groups which isn’t surprising since he is a Tea Party favorite) at 24%, Senator Hatch’s was Healthcare at 30%.

The source file, Chaffetz 2006-2012 Campaign Contributions (Excel 2007), can be downloaded simply by clicking on the aforementioned filename.

Here are the charts and tables: 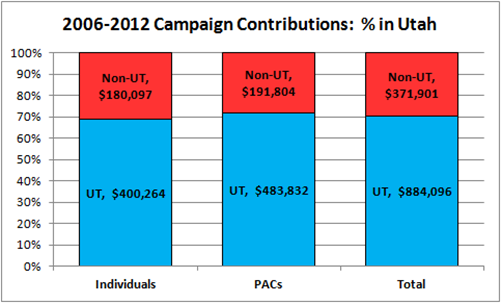 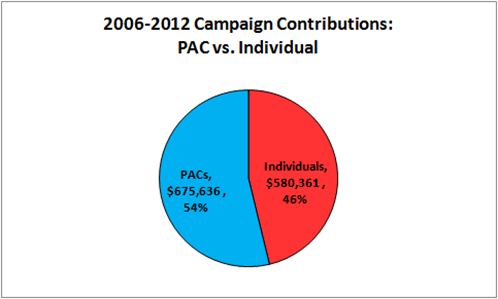 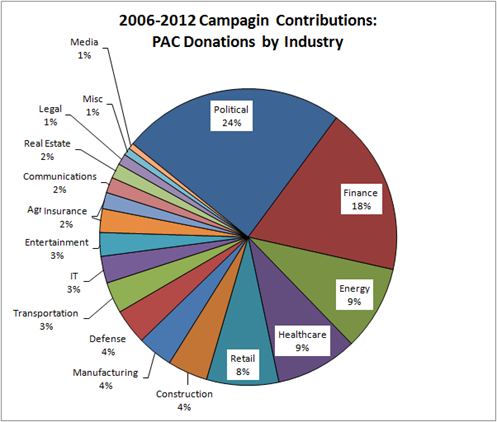