Did You Hear The Bells this Christmas? 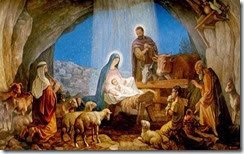 My wife and I were the speakers in last Sunday’s Christmas program that included choral and congregational songs plus a little narration. We were asked to prepare seven minute talks on the subject of Christmas. Although we prepared our remarks independently they complemented each other as if we had collaborated on them. Each of our talks referenced hymns that “coincidentally” were sung before we spoke (we had no prior knowledge of rest of the program). Suzanne’s hymn was “God Loved Us, So He Sent His Son” and mine was “I Heard the Bells on Christmas Day.” The program opened with a short introductory narration which surprisingly included quotes from the scriptures that my wife included in her talk. Someone attending would have thought that each part of the program was orchestrated in advance, and I suppose it was, but not by the bishop or the music director.

The following is the text of my remarks (or at least a close approximation):

Over 2,000 years ago the first Christmas arrived and the heavens rejoiced. A new star appeared in the sky. Wise men took note and began their journey to find the king of the Jews and bring him gifts. Angelic choirs sang the words “Glory to God in the highest and on earth peace, good will towards man.”

Today during the Christmas season beautiful lights appear throughout our neighborhoods, people begin their quests to find gifts for loved ones and choirs sing carols celebrating the birth of our Savior. One of my favorite carols is “I Heard the Bells on Christmas Day.” I love it because it speaks not only of the joy of the season but also of the trials of life.

The lyrics were written by the poet Henry Wadsworth Longfellow on Christmas day 1863. He had recently been informed that his son was gravely wounded in a civil war battle and still grieved over the death of his wife two years previous. She died as the result of burns she received when her dress caught fire at home. Longfellow had rushed to aid her and put out the fire but her burns were too severe and she died the following day.

Ed Hermann shares story surrounding Longfellow’s poem, “I Heard the Bells on Christmas Day” with the Mormon Tabernacle in the background. If you have not seen this before it is quite moving and well worth your time.

This was not the happy Christmas of youth. Henry was struggling as we do at times. His was a struggle filled with personal tragedy, the loss of a spouse and the serious injury of a child. In our case it may be that we are simply overwhelmed by life and our responsibilities, saddened difficulties faced by family members, or even burdened with the consequences of personnel choices.

Although we often speak of the joy surrounding the birth of Christ, I wonder if Mary had imagined giving birth to the son of God in a stable away from family. I wonder if she considered the possibility that she would have to flee her native country, or watch her son be crucified. Even for the mother of Christ the Savior of the world there were hardships to bear.

It is ironic that for the Savior, who’s atoning sacrifice opened the doors of Heaven for the world, there was no room in the inn at his birth, no room in his country during his youth, and in the end no room on the earth. Yet, despite the unkindness and cruelty expressed by many to him, Christ showed love and compassion to others throughout his life.

A bible story that has become of favorite of mine in the last year is the one about Jesus and the rich young man. It can be found in Matthew, Mark, and Luke. I’m sure most of you are familiar with it. But perhaps, like me, you may have missed  a couple of points that are found in the version told in Mark 10:17-27.

A wealthy man runs up to the Savior as He is walking down a road with His disciples and asked what he should do to inherit eternal life. Christ recites the commandments to him and the man replies “all these have I observed from my youth”.

Now here is the first item I missed until earlier in this year, just after the passing of my mother. “Then Jesus beholding him loved him, and said unto him, … .” My mother used to put her hands on my cheeks, look me in the eyes and tell me that she loved me. She knew most of my faults, she knew of many of the stupidities of my youth and yet she loved me. That is how I picture Christ looking at the man and perhaps that is why when I read this after my mother died I was drawn to the words; “Jesus beholding him loved him.”

Christ then continues. “One thing thou lackest: go thy way, sell whatsoever thou hast, and give to the poor, and thou shalt have treasure in heaven: and come, take up the cross, and follow me.” The man “was sad at that saying, and went away grieved”. Now Jesus knew that this would be the man’s initial response. Perhaps, He made the effort to visibly show His love to give the man something to consider as he went his way. Who knows, before he reached home the rich man could very well have decided to do as the Savior asked.

Christ’s next statement is the second item that caught my attention earlier this year, especially as I thought about the rich man that Christ loved; “With men it is impossible, but not with God: for with God all things are possible.” This brings me back to the lyrics of  “I Heard the Bells on Christmas Day” and Henry Wadsworth Longfellow.

Like Longfellow, I have a testimony that there is a God and that, from an eternal perspective, the wrong shall fail and the right will prevail. I close with this thought; that wherever we are in life, that no matter the circumstances, there is a path forward for “with God all things are possible”. I can visualize the Savior beholding us and loving us; telling us it may not be easy, it may not always be “fun” but there will always be peace and joy in following Him. Let us enjoy Christmas with this knowledge and start the new year with hope and a renewed determination to follow Christ. In His holy name amen!