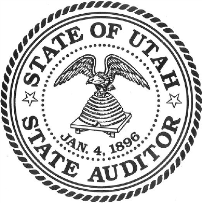 We received the final report from the State Auditor’s office regarding the Lone Peak Fire District. There are a number of things that the district can improve on and I am thankful to the state auditors for putting together a  comprehensive list of items to work on.You can read the report below (click here to view the official pdf version of the report).

Here are links to stories in the media that cover the report:

Findings and Recommendations
For the Period July 2013 through March 2017

OFFICE OF THE
STATE AUDITOR

OFFICE OF THE
STATE AUDITOR
REPORT NO. LPPS17-SP

The Office of the State Auditor has a hotline program through which we receive complaints with financial or compliance implications related to state and local governments. We received numerous allegations of impropriety regarding various aspects of Lone Peak Fire Department (LPFD) within the Lone Peak Public Safety District (District). We limited our investigation to those complaints that we deemed to involve public funds, involved events that fell within the time period noted below, and could be supported with sufficient evidence.

We performed the following procedures at the LPFD for the period July 2013 through March 2017 unless otherwise noted.

The results of our investigation are included in the attached findings and recommendations section of this report.

By its nature, this report focuses on exceptions, weaknesses, and problems. This focus should not be understood to mean there are not also various strengths and accomplishments. We appreciate the courtesy and assistance extended to us by the personnel of the District during the course of the engagement, and we look forward to a continuing professional relationship. If you have any questions, please call Julie Wrigley, Audit Manager, at 801-538-1340.

Office of the State Auditor

The Lone Peak Public Safety District (District) is an “interlocal” entity formed under Utah Code 11-13, Interlocal Cooperation Act. The Interlocal Agreement exists between Alpine City, the City of Highland, and the City of Cedar Hills and provides for police, ambulance, fire, and emergency medical services to those cities. Our investigation was limited to the Lone Peak Fire Department (LPFD) which is part of the District. The District is overseen by a Board comprised of elected officials from the member cities. The Board appoints an Executive Director to provide oversight and administrative support to the District. The Board also appoints the Fire Chief who manages the LPFD.

1 THE BOARD, EXECUTIVE DIRECTOR, AND FIRE CHIEF SHOULD STRENGTHEN THE “TONE AT THE TOP” AND THE CONTROL ENVIRONMENT

Utah Code 11-13-402 indicates that the Board is ultimately accountable for the District’s orderly operation. The findings below indicate that the Board could improve their oversight and should be more proactive in setting policies, procedures, and internal controls over LPFD’s activities.

In addition to the matters discussed below, we investigated allegations about actions with ethical implications. In several cases, we found that the District had investigated these incidents when reported and that involved employees were disciplined. However, we are concerned that the discipline may be perceived as having been too lenient. In one case, an employee was demoted for misusing funds from the employee association (see Finding No. 6), but was given a significant promotion a short time later. Although we recognize that management has discretion in these matters, discipline that is perceived as too lenient can contribute to a weak control environment where employees may not believe that management places a high value on ethical behavior and adherence to rules. This type of environment can lead some employees to believe the “rules don’t matter” which might result in employees ignoring the rules or practicing unethical behavior.

It was reported that employees were allowed to work on personal matters while on duty after regular business hours. We have found this is a somewhat common practice among fire departments. While it seems reasonable to allow employees some leeway to attend to personal matters on long shifts, we noted at least one employee had worked on his own personal, for- profit business matters while on duty. The District should exercise caution to avoid the perception that employees are able to benefit improperly while on duty.

We received another allegation of unethical behavior which occurred prior to our testwork period, but we were able to determine that it did, in fact, occur. In this instance, the Fire Chief asked an employee to provide a service on his behalf during the second half of the employee’s 48-hour shift. The Fire Chief justified the action by using six hours of his own comp time and also by indicating that he would have responded to an incident if necessary. In our judgment, the Fire Chief’s actions were improper since 1) the employee was paid by the District for the portion of the shift during which he was providing the service for the Fire Chief, 2) the Fire Chief benefitted personally, and 3) the Fire Chief put the subordinate in a difficult position by directing him to do something improper. Although this incident happened prior to our testwork period, we are concerned that this and the other incidents noted above may be indicative of a weak ethical culture.

These types of weaknesses could be mitigated through the District’s adoption of a code of ethics. In addition, the Board could improve its oversight of the District by performing a self assessment and implementation of best practices using the “Checklist of Best Practices for Board Members of Special Purpose Entities” (Attachment A) taken from A Review of Best Practices for Internal Control of Limited Purpose Entities, Report No. 2017-05, issued by the Legislative Auditor General, June 2017.

We recommend the Board:

We recommend the Executive Director:

We recommend the Board, Executive Director, and Fire Chief:

The LPFD failed to strictly adhere to policies and retain adequate supporting documentation for the sale and purchase of vehicles and the recording of those transactions. Adding to the questionability of these transactions is the fact that they occurred between the LPFD and its employees.

Failure to follow policy and retain the appropriate documentation increases the perception that employees of the District may be benefitting from their position.

The term “internal controls” is used to describe processes put in place by the governing body, management, or others to provide consistent and efficient operations, including reasonable assurance that funds will be properly safeguarded. Proper internal controls include:

We recommend the Board:

We recommend the Executive Director:

The District does not have adequate policies over certain areas that we generally consider to be high risk for waste and abuse. The District could improve its control environment by developing and implementing policies over the following areas:

Adequate policies create a framework for the proper use of public funds and help establish controls to ensure funds are used within approved parameters. The executive director and Fire Chief have not established a process to periodically review and update policies as necessary. The lack of policies increases the risk that funds may be used inappropriately.

We recommend that the District take a proactive approach in developing and reviewing policies that will help establish limits and controls over the expenditures of public funds. Specifically, the Board should establish policies that address the high risk areas noted above. Also, the Board should review the District’s Procurement Policy to ensure that it is clear and that dollar thresholds for bids and quotes are reasonable.

The District has issued credit cards to three employees for LPFD use. The use of credit cards can be an efficient method of making purchases, especially small dollar purchases or “micro- purchases.” However, credit cards by their nature have a high risk of improper use because few controls exist over the creation of credit card accounts and an entity must rely heavily on detective controls rather than preventative controls to reduce the risk of abuse. Alternatively, the use of purchase cards, or p-cards, can effectively mitigate some of these risks, as the organization has more control in establishing p-card accounts. For example, organizations can mandate transaction limits unique to each p-card and, depending upon the p-card service provider, can limit purchases to certain merchant categories. Because p-cards are linked to an organization’s bank, only authorized employees may create p-card accounts.

In addition, p-card transaction details are electronically transmitted to the purchasing entity, allowing an organization to review the purchases timelier. Transmitted information typically includes the amount, the vendor’s name and address, and the date of the transaction. In some instances, p-card service providers may be able to transmit descriptions and quantities of items purchased; however, such line-item detail is only available from some merchants. Since p-card accounts are more difficult to create and allow establishment of unique restrictions, the District could minimize potential inappropriate purchases by using p-cards rather than credit cards.

Sound controls, such as those recommended above, are still critical for ensuring proper use of any "micro-purchase" cards, be they credit cards or p-cards.

We recommend that the District replace credit cards with p-cards.

6. AUTOMATIC PAYROLL DEDUCTIONS FOR THE EMPLOYEE ASSOCIATION FUND MAY IMPLY LPFD OVERSIGHT THAT DOES NOT EXIST

The checklist below was taken from

A Review of Best Practices for Internal Control of Limited Purpose Entities
Report No. 2017-05 issued by the Legislative Auditor General, June 2017

Checklist of Best Practices for Board Members
Of Limited Purpose Entities

Roles of Board and Staff
See report pages 23 to 27.

On behalf of the Lone Peak Public Safety District (District) we would like to thank you for reviewing the operations of the District. We have reviewed the draft report and have determined to follow all of the recommendations outlined in the report. Implementation has already begun.

In addition, it would be beneficial if there any “best practices and model polices” that could be provided to assist the District in addressing the concerns and moving forward.