Your Change, Sir: Opening Our Eyes and Becoming Better 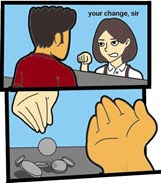 About 25 years ago I started a new job. Over time I became good friends with one of my co-workers, Eric Hughes. He is incredibly innovative, outgoing, kind, positive and has a great sense of humor. We were having lunch one day and talking about racial bias. I didn’t believe it was very prevalent. However, Eric, who is black, said it still existed and he regularly experienced it. As an example, he shared how some store clerks would put change on the counter rather than put it in his hand. I was taken aback and it caused me to look myself a little differently and see if I needed to do better.

Subsequent to that I was talking with another dear friend and business associate, Marti Colwell who, like Eric, is a talented and amazing person. During the conversation I used a term regarding negotiations that I could tell gave her pause. I had used a phrase that referenced her heritage (Jewish). I certainly had not intended to offend. It was a phrase I had heard often growing up and used it without thinking about its implications. She didn’t say much, but I could tell from her eyes that what I said was hurtful. Her quiet reprimand made me a better more thoughtful person. We remain good friends to this day.

Over a year ago I was at a meeting where Dr. Susan Madsen spoke about unconscious bias as it relates to woman. As with Eric, I had assumed that bias was very limited in this sphere, but again I was wrong. As Dr. Madsen went through her presentation I realized that there were a lot of things in the world I just didn’t see. In a recent article she published on unconscious bias training, she noted the following

Have we made progress over the years in reducing bias? Yes! However, we live in an imperfect world and so there will always be things that we can improve on. I’ve found that having sincere and honest conversations with those who are different than me is the best way to remove negative preconceptions. Perhaps this is because our ability to empathize with others improves when with listen. In his book “The War for Kindness”, Jamil Zaki states, “Empathy’s most important role, though, is to inspire kindness: our tendency to help each other, even at a cost to ourselves.” Kindness is something the world certainly needs more of, especially today.

On June 10th of the year we recorded conversation with Highland’s police chief, Brian Gwilliam, Highland residents Ronell Hugh, Brady Brammer (State Rep), Nicki Brammer, myself, and Alpine’s Mayor Troy Stout about racial inclusivity.It was a great conversation and one that is worth watching.

After this discussion our group put together a Learn Feel Act Challenge that can help families gain a broader perspective on racial issues. The challenges asked families to read a book, watch a video and memorize a quote. They can select their own resources or use a list we worked with the library to develop that include recommendations based on the reader's age. An independent group has created its own website with a broader list of material. I am sure that this site items that we otherwise might not read and won’t agree with but I have always found learning about other perspectives to be valuable.

After learning about these issues, the challenge asks families to explore their feelings and develop a plan for positive actions. One of these actions could include meeting with a member of our police department to learn more about how they deal with bias and other issues. You can schedule your appointment by calling (801) 756-9800. Our police chief, Brian Gwilliam, and I hope you do. 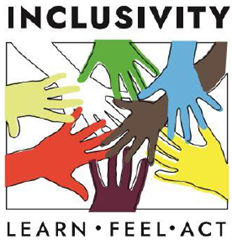 After completing the challenge you will be awarded with a sticker that you can put on a window in your home or car to indicate that your family values inclusivity and is taking steps to be more inclusive. Additionally, you will receive t-shirts for family members to wear.

For those of you who are old enough to remember, the sticker reminds me of the helping hand sign that the people put in their windows when I was growing up. It indicated that the home was a place you could go to if you felt unsafe (e.g. if you were being chased by someone older on the way home from school).

Knowledge can influence actions and change behaviors. It has in my life and I hope it will continue to do so. Frederick Douglass, an abolitionist leader and former slave, changed his view over time on what actions needed to be taken to make progress as he learned and grew. Here’s a quote from a speech he gave in Glasgow, Scotland on March 26, 1860:

“When I was a child, I thought and spoke as a child. But the question is not as to what were my opinions fourteen years ago, but what they are now. If I am right now, it really does not matter what I was fourteen years ago. My position now is one of reform, not of revolution. I would act for the abolition of slavery through the Government — not over its ruins.”